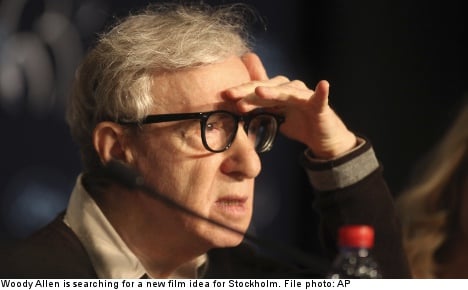 Recent settings include Barcelona, Paris, Rome and London, and next on the cards could be Stockholm, but there’s just one thing holding the director back.

“We’ve been offered the money. Now it’s just up to me to find a good Stockholm story,” Allen told the Aftonbladet newspaper.

“I love Stockholm, I have been there privately several times, but it’s not just about getting the money. I really want it to be a story and a film that all Stockholmers can be proud of. Without that, it would just be an ad, of course,” he added.

The funding for the movie has been offered by The Stockholm Film Commission, which works with both the private and public sector and has offered to inject $20 million into the project.

“We already know that he thinks Stockholm is a very attractive setting for a movie. He was already tempted, he was just waiting for an offer, so we got in touch and made it,” Annette Mattsson, CEO of The Stockholm Film Commission, told The Local.

While one Swedish film expert has his own ideas how to solve the plot problems, Matsson and her team are not particularly concerned.

“He’ll find a story, we know how much he loves it here so I’m not too worried personally, she told The Local.

“He says that Stockholm affects him in a serious way, and that the film will likely be a reflection of that. I’m not quite sure what he means by that, but we’re expecting something of a serious film and we’re very excited about it.”

Do you have a story idea for Woody? Pitch it in the comments section below. The most upvoted idea will win two cinema tickets to the film.