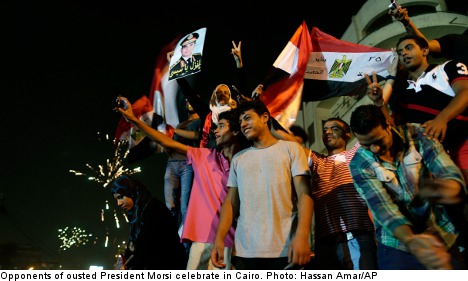 “Everyone must respect democratic principles and the constitutional order of Egypt. Solution must be sought within this framework,” Bildt wrote via Twitter.

“Following events in Egypt as closely as possible. Contact with EU:s Catherine Ashton as well as our Embassy in Cairo,” Bildt said from Visby on Gotland where he is attending the Almedalen political week.

The army chief explained that the head of the constitutional court will be sworn in as interim leader on Thursday.

Officials from Morsi’s Muslim Brotherhood meanwhile denounced what they described as a military coup claiming that Mohammed Morsi has been detained.

The move sparked wild celebrations in Cairo which has been the scene of mass demonstrations in recent days protesting against President Morsi’s rule.

Carl Bildt expressed concern in the early hours of Thursday over reports that media was been restricted following the army takeover.

“I’m worried also by news of TV stations being closed in Egypt,” he said.