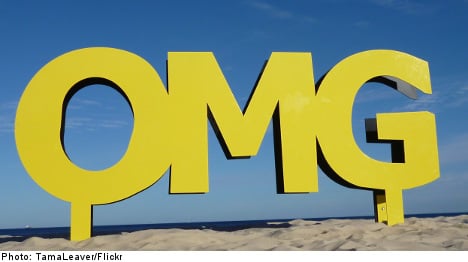 The driver, who lives in Stockholm, asked the agency for permission to have plates that either read OMGWTF or OMG WTF.

Both OMG and WTF, two popular acronyms that stand for Oh My God and What The Fuck, were deemed inappropriate for Stockholm roads.

“Both the combinations you requested can be interpreted to be offensive,” the transport agency wrote in its ruling.

“The agency therefore rejects your requests.”

Rejected number plates are nothing new for the Swedish Transport Agency. In August 2010, The Local reported that another Stockholmer’s request was deemed inappropriate after he asked for a plate reading FCKU2MF.

In June last year, a man in Falköping calling himself The Mad Swede told The Local he was not a Satanist, but his motorcycle’s 666 plate was still banned by the agency.

IN PICTURES: See more images of The Mad Swede and his motorbike

Other combinations that have fallen foul of the agency in the past include Gestapo, Sexyboy, My BMW, Come On, HEINEKN, and Beetle.