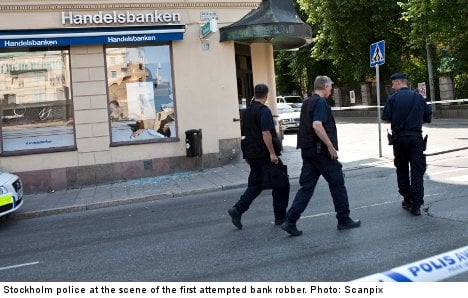 On Friday morning, Stockholm police cordoned off a street by Östermalmstorg square in central Stockholm, after a blast rocked a Handelsbanken office in the upscale neighbourhood.

The Local reporter Elodie Pradet said passers-by were inspecting the broken window of the bank at 8.30am, before the police arrived.

“People looked worried in a neighbourhood where nothing usually happens,” she said. An hour later, a police helicopter kept an eye from above as officers on the ground cordoned off a side street.

Witnesses said they saw a grey Volvo flee the scene, but testimonies differed on the number of people inside. The police said the car had fake number plates.

By noon, police could confirm that the drivers of the grey Volvo drove on to try and rob a second bank, this time located on the corner of Valhallavägen and Erik Dahlbergsgatan.

“The police are investigating the two robberies separately, but the Volvo seen by witnesses at the first bank is the same car that we came across at robbery number two,” police spokeswoman Towe Hägg told the press.