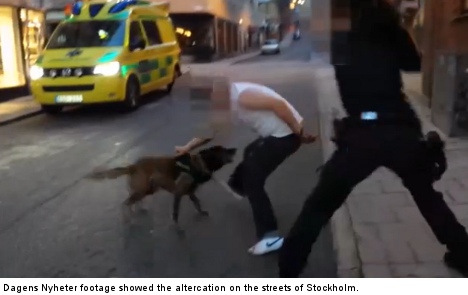 “The absolutely most difficult thing to do is to get a verdict against a police officer in cases of violence when they were on duty,” chief prosecutor Christer Ekelund, at the national internal police review board, told the Dagens Nyheter (DN) newspaper.

In 2011, there were more than 5,600 reports against police officers, but only 1.6 percent led to charges being brought against the accused. Now DN can reveal that even when cases lead to prosecution, the conviction or reprimand rate is about 50 percent.

Between 2005 and 2012, 53 cases led to charges. In 27 of those cases, the officer walked free. The successful prosecution rate of about 50 percent is much lower than prosecution rates overall across the country, which stand at about 80 percent.

The issue of police violence has come to light after video footage showed a policewoman set her dog on a man who was slurring his words on a Stockholm street. As he seemingly struggled to keep the animal at bay by grabbing on to its collar, the police officer proceeded to hit him repeatedly with a baton, until he fell to the ground and she ordered the dog to sit.

Chief prosecutor Christer Ekelund said there are no hard and fast rules to explain why police prosecution rates are comparatively low.

“It is rather complex. At times the court doesn’t share the prosecutor’s view on what violence is permissible,” he told DN.

“The police officer can also say they perceived it as an emergency situation. Then the prosecutor has to prove that the officer did not perceive it that way. It is often very difficult to do.”