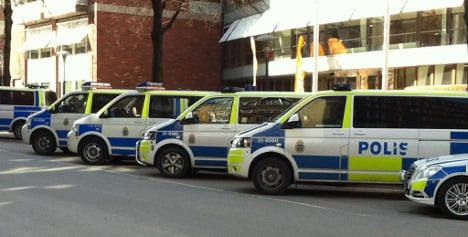 The film, published by the Expressen newspaper, shows a police car pulling up alongside another vehicle and amid a group of spectators at Jordbrolänken, on a 640 metre stretch of road roughly 20 kilometres south of central Stockholm.

Upon a signal given by a man standing in front of the two vehicles, both cars then accelerate into the distance to the cheers of the crowd.

The incident occurred late on a Saturday night two weeks ago.

Local police have come under fire since the news was revealed on Sunday, as the area where the race occurred has been notorious for street races in the past. Two people were killed on Saturday night in an accident along the stretch.

Police officers were not impressed to learn of the footage.

“It sounds unbelievable. Our task is to put a stop to such incidents.”

The police car involved in the race was not reported stolen, and is believed to have been driven by the officer on duty.

However, other officers have downplayed the incident.

“I don’t see that any crime has been committed. I see two cars driving away,” Christian Agdur, head of the Södertörn police, told the paper.

“I have asked my staff to find out who is in the car and then have ordered for their boss to have a word with them,” he added.

Another patrol showed up later in the evening and broke up the races, according to Expressen.