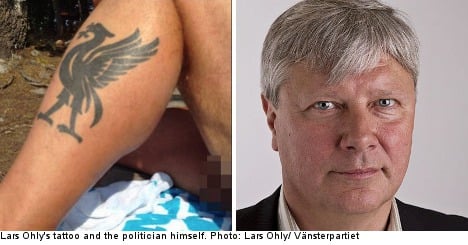 Lars Ohly, the former chairman of the Swedish Left Party (Vänsterpartiet), hit the front pages of Swedish papers on Wednesday for all the wrong reasons.

An Instragram post he uploaded on Wednesday, in which he displayed his new calf tattoo in honour of the Liverpool Football Club, showed a glimpse of the left-leaning politician’s private parts.

After the picture garnered 18 likes on the popular photo-sharing site, it was removed by the 56-year-old Swede. The politician took the incident in good humour, however.

“It’s not very embarrassing really,” he told The Local of the bungle, adding that he’s had “lots of nice reactions”, later turning to his Twitter account to laugh the matter off.

“Summer’s wonderful. The willy picture is today’s hot topic. Completely by accident, though. The future will see a more thorough uploading review process,” he wrote in the early afternoon.

As the story picked up steam around the country, Ohly kept to Twitter to update his growing fan base.

“Oh, how many new followers I’ve got on Instagram today (and how disappointed they’re going to be),” he added later.

He also wrote that the “best reaction of the day” was from former Social Democrat leader Håkan Juholt who texted him to say “I’d planned to grill sausages tonight but now it’s going to be chicken.”

Sweden’s Foreign Minister Carl Bildt, who on Wednesday was named the most well-connected world leader on Twitter, used his Swedish account to have a friendly poke at Ohly.

“Congratulations – after all these years you’ve made a genuine public breakthrough!” he wrote.

Ohly, meanwhile, is taking the incident in his stride.

“You just need to be a bit laid back,” he told The Local. “But for me, the whole story is over now.”