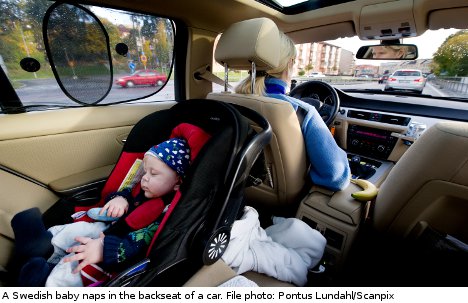 The findings come from a soon-to-be-finished study by the Swedish National Road and Transport Institute (Statens väg- och transportforskningsinstitut -VTI), where researchers discovered that the low-frequency sounds from smooth roads induce a soporific effect on drivers.

Such sounds can be reduced depending on the type of road surface, the type of tyres, and the car’s insulation.

“It can help if the car is optimally insulated, but it’s impossible to avoid the low frequency sound,” one of the researchers, Anna Anund, told the Dagens Nyheter newspaper, adding that there is “a significant difference” between night-time and day-time driving.

Researchers have, however, rolled out tests on roads in eastern Sweden to determine whether buffing down the coarse road surfaces can reduce the noise and thereby the ensuing fatigue, finding promising results so far.

Sleepiness among drivers is a contributing factor in around 20 percent of traffic accidents in Sweden.

The connection between low-frequency sounds and fatigue remains unclear, although one theory suggests that the monotonous noise gives humans a sense of safety, something that can be traced back to the womb.

Another theory is that low-frequency sounds are hard to identify and can therefore trigger strained hearing, leading to brain fatigue, the paper wrote.

According to the national transport institute, Swedish law states that it is not legal to drive when you are fatigued, but there is no clear definition, however, of what is meant by fatigued, and the law is hard to police.

The agency stated that “as there is no trustworthy and objective way to measure either fatigue or performance, it is not possible to find a better solution than the regulations that exist today”.