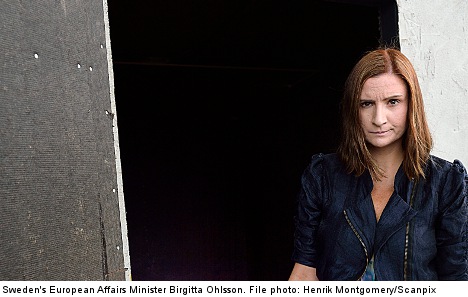 Birgitta Ohlsson, one of Sweden’s staunchest advocates of equal rights and The Local’s Swede of the Week, has had a busy week. The vibrant colours of Stockholm’s Pride Week have been sullied by news of Russia’s anti-gay laws, which among other things ban “propaganda for non-traditional sexual relations.”

Ohlsson has been working to ensure Sweden leads the international fight against the laws – something that resulted in her being pelted with eggs during a speech at a Pride event in Lithuania on Saturday.

“When it comes to countries like Russia I think it’s so important to have a united front towards the negative messages that are coming from them, and Sweden is one of the key players in this dialogue,” she told The Local.

She added that she was pushing the European Union’s foreign affairs spokeswoman Catherine Ashton into sharing a “very solid and firm position” on condemning the politics in Russia.

“Of course, we have the horrifying anti-gay law – that is repulsive and disgusting, going in the total wrong direction. But then we have other laws that are also very severe for the Russian open civil society and that has to do with laws concerning freedom of expression, freedom of assembly,” she said.

“Other countries are not holding to the position as they should when it comes to human rights and the rule of law.”

Russia, she claimed, needs to perform a complete U-turn:

“[Russia is] not respecting LGBT human rights. What is key now is to have a dedicated support to LGBT supporters and other human rights activists in the area – and Sweden is definitely one of the key players in the EU [in this regard],” Ohlsson said.

But the minister’s dedication and presence at pride events is not always welcome, however, with protesters in Vilnius hurling eggs at Ohlsson on Saturday when she spoke at the second ever pride event to be held in Lithuania, a largely Catholic country.

“That was an interesting experience… but we have to keep up the pressure. When it comes to the Lithuania, they are in the EU, so we can have an even more solid approach with them,” she told The Local.