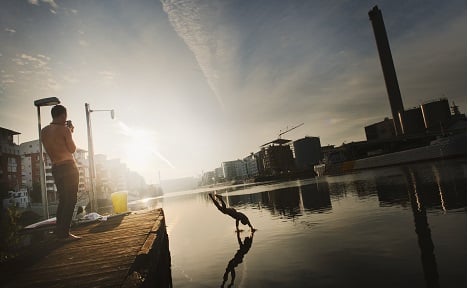 Stockholm – the Venice of the North. But instead of poky little waterways crammed with tourists in gondolas, the Swedish capital is covered with sprawling lakes, inlets, and waterways ideal for swimming.

And with summer in full swing, we've asked around and gathered the top ten in the city, complete with directions and pictures.

Grab your towel, your train pass (or bike), then get swimming.

But don't forget to brace yourself, the water can be on the cool side. 
A favourite amongst Stockholmers is on the island of Långholmen. The island itself is worth a look before you take to the waters, and even boasts an old converted jail. The sand beach, on the north side of the island, offers stunning views of the Västerbron bridge and Kungsholmen across the water. Closest T-Bana: Hornstull. Something more secluded? Here is another lake that's worth a look is the Sickla Lake. At the foot of Stockholm's own skiing hill, in Sickla, there are a few neat spots to take the plunge along the north side of the lake. As this is a little way off the tourist track, you might even find the lake empty, and why not take a stroll in the nature reserve on the other side of the lake? Directions: Take tram from Gullmarsplan to Sickla Udde and walk. As if the park wasn't pretty enough with its lush green grass and its royal palace, it has a number of places where you can jump in and appreciate the park from a different angle. There are cliffs and beaches on the east side, and some quieter swimming spots on the west. Closest T-Bana: Universitet. Twitter user @Colburt187 prefers lakes to the sea. “Järla sjön is lovely in the evenings,” he trumpets. “It's tree lined so you feel out of the city. It's a lovely, hidden treasure.” Nearest station: Järla Station on the Saltjöbaden line. Another sandy beach is just across the water on the other side of the bridge. Smedsuddsbadet is worth a look, but it's no secret, so be prepared to jostle if you want a prime location by the water. Closest T-Bana: Thorildsplan or Fridhemsplan. Twitter user @NeilJMorrison says you can't beat the cliffs of Fredhäll. “You can just hop in from bottom of cliffs,” he says. “Great views and you can grillfest on the rocks.” Closest T-Bana: Kristineberg.

You're done with your hipster spotting on the trendy Södermalm island and you need to wash it all off… why not head west to Liljeholmsviken on the other side of Tantolunden Park? There, you can go for the more traditional sandy beach option or the rocks, and enjoy wonderful views of Stockholm from the water itself. Kanaanbadet, north of Stockholm, features an expansive beachfront divided into two separate swimming areas complimented by ample green space for picnics, pick-up football, and sunbathing. There's also a small eatery that serves snacks and ice cream, as well as a miniature golf course. Getting there: Take the metro's green line toward Hasselby and get off at Blackeberg, and then walk about 1km through the Grimsta nature reserve. There is also ample parking nearby. While it's a bit of a trek from central Stockholm, Fågelöudde beach out on the north side of Lindingö is reachable by public transport and is well worth the trip. It features an expansive sloping green lawn, sandy beaches, as well as play areas, a grilling station, as well as a small grill kiosk.

It's a quarry! It's a pond! It's a… it's the Blue Lagoon! Not the smokey kind like Reykjavík has, nor the half-naked Brooke Shields variety. An old gravel quarry on the Stockholm island Ekerö has filled up with the most amazing turquoise water. The images are incredible.

Because it's so deep, the water is quite cold, but the gravelly beaches reflect so much sun you may need to cool off. Popular with families and broilers alike.