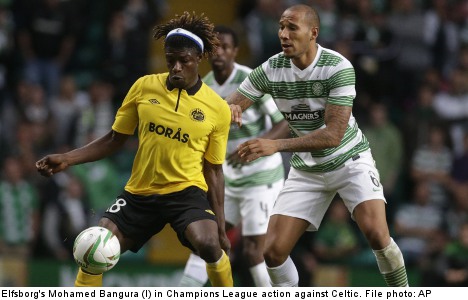 “We’re very strong at home and feel that we have a chance,” Elfsborg coach Jörgen Lennartsson told the Aftonbladet newspaper.

Celtic, however, also has high hopes of advancing, holding a 1-0 advantage from the first leg thanks to a Kris Commons strike at Parkhead last week.

The Scottish champions’ dismal form away from home in Europe improved drastically last season with wins against Helsinki, Helsingborg and Spartak Moscow, coming in a run to the last 16 of the Champions League.

And, after also coming close against Barcelona and Benfica, Scotland midfielder Scott Brown believes trainer Neil Lennon has finally taught them how to handle the pressure on the road.

“This is a club who can go away from home now and get a good result,” Brown said.

“There was talk about it in the past, about us struggling to go away and getting beat in every game, but now we can win away as well as at home.

“That’s what the gaffer has instilled in us. Last season we went on a good run – even looking back to the qualifiers as well – so it was good experience for us.”

Celtic will face an Elfsborg side that is unbeaten at its home Borås Arena since September 2011 and the Swedish champions are already midway through their domestic season.

“In 27 matches here we’ve only lost one and that gives us a sense of confidence and security. Celtic is the favourite and they have all the pressure. We’re in a good place mentally,” Elfsborg trainer Lennartsson said.

The Glasgow club will also have to contend with the artificial surface Elfsborg play on, but Brown is optimistic of his side’s chances.

“We’ve been training on the astroturf here so it’s helping us get our head around it,” he said.

“We’re not sure yet what kind of astroturf it will be yet, but we’ll find out when we get over there and train on it.

“Over the last two seasons we’ve played quite a lot of games on that kind of surface so we’re getting used to it.

“Elfsborg came out with a game-plan at Celtic Park and they stuck to it. They tried to defend and sneak a goal at the end hoping to get a draw so they could take us back to the astro pitch.

“We did well on the night, though, and even though they were 16 games into their season we looked a lot fitter.”

The match against Elfsborg will be Celtic’s fifth competitive game of the season and Brown admitted he felt slightly aggrieved that his side were forced into playing three qualifying rounds in order to reach the lucrative group stages of the Champions League.

“It’s frustrating winning the league and not going straight into the Champions League but that’s part and parcel with the game really,” he said.

“We just need to do whatever we can to get into the Champions League now.

“It’s going to be hard but we’re going to aim as high as possible.

“We’re a big club and we need to try and get into it year in, year out, even if it’s through two or three qualifiers.

“Wednesday is a huge game and we’re not through it yet so we can’t look forward, that’s for sure.”

Elfsborg striker Mohamed Bangura, on loan to the Swedish side from Celtic, is expected to be in the starting line-up despite suffering a thigh strain at training on Monday.