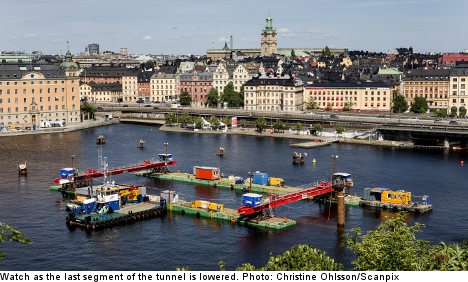 Eight out of ten rail journeys in Sweden begin in Stockholm. The Citybanan project is set to reduce Stockholm congestion, and allow the commuter trains their own lines, which will run underground and under water. But how? And where? And why?

Here are the facts:

IN PICTURES: Watch as the final segment is lowered and head into the tunnel

The Swedish Transport Administration and the City of Stockholm, Stockholm County Council and Stockholm Transport, SL.

The train lines running up to Stockholm Central Station (T-Centralen) are overloaded with trains, with only two current tracks in operation. The Citybanan will reduce congestion by doubling the capacity, and trains will be more punctual.

5) How and when will I be able to take the tunnel?

There will be two new stations: City and Odenplan, as well as a 1.4 kilometre-long railway bridge at Årsta. Stockholm City Station will have two platforms with escalators providing direct access to all metro lines. The tracks will open to the public in 2017.