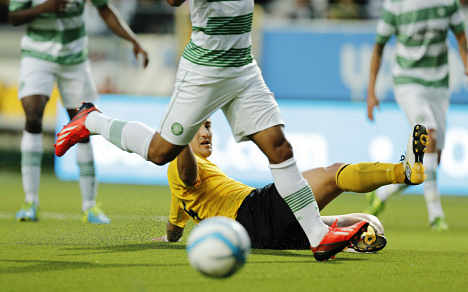 The Scottish champions’ slender 1-0 advantage from last week’s match in Glasgow proved to be enough as they took the next step on their long journey to reach the lucrative group stages of Europe’s elite club competition.

Mo Bangura, on loan from Celtic, came close to scoring against his parent club with an acrobatic effort from the edge of the box before both Georgios Samaras and Joe Ledley spurned glorious chances to put the visitors in front.

The Hoops didn’t have it all their own way against the Swedish champions, who went on the front foot in the second period, but James Keene had a penalty claim turned down as Elfsborg couldn’t find the goal that would have forced extra time.

Celtic are seeded for the play-off round, so they should fancy their chances of returning to the group stage regardless of who they are paired with

when the draw is made on Friday.

At the Borås Arena, Elfsborg – unbeaten at home since September 2011 –

test, and the Sierra Leone international almost scored a stunning opener for

Celtic tried to respond and Samaras should have done better when Mikael Lustig picked him out with a cross but he powered a free header over the bar from 12 yards.

The Hoops were presented with a fantastic opportunity in the 20th minute when Kris Commons’ drilled free-kick broke to Ledley 10 yards out but the Welshman was denied by a fine save from ‘keeper Kevin Stuhr-Ellegaard.

Bangura then spurned a chance to score against his parent club when he headed a Stefan Ishizaki cross over the bar from eight yards after losing his marker Efe Ambrose.

Celtic fans had their hearts in their mouths in the 56th minute after a long throw caused consternation in the six-yard box with the ball pinging around dangerously close to the line before an offside decision saved the Hoops.

And the visitors survived another scare when Elfsborgs’ English striker Keene went down in the box after a robust challenge from Kelvin Wilson, but the referee ignored the penalty pleas.

Forster then got down to stop a low Johan Larsson drive and Henning Hauger blazed over after being set up by Bangura but Elfsborg, who finished with four forwards, couldn’t break the deadlock.