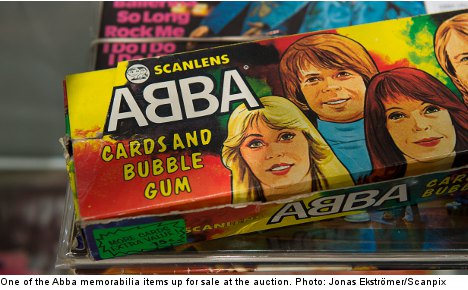 Thomas Nordin, a collector of all things related to the group famous for hits including Dancing Queen, Fernando and Mamma Mia, had put some 25,000 items up for sale.

Auction house Stockholms Auktionsverk estimated the two-day sale of the collection — the largest dedicated to the iconic disco group to be sold at auction — could fetch up to $125,000.

SEE ALSO: Watch a video clip from when The Local got Stockholmers to sing Mamma Mia

“We shouldn’t forget this is the first time such a sale has taken place,” he told AFP, saying some lots had surpassed expectations.

A purple jacket bearing the name of the group went for 31,500 kronor, more than seven times the list price.

And a limited edition maxi single produced in 1981 by the group for their manager Stig Anderson’s 50th birthday was sold for 42,000 kronor almost twice the list price of 25,000 kronor. Only 200 copies of the single had been produced.

The collection comprised objects collected by Nordin since 1974 when Abba burst onto the international scene winning the Eurovision contest with their song Waterloo.

Nordin, an Abba fan who was nine at the time, has since then picked up rare items and unusual merchandise from around the world, such as Abba clogs made exclusively for the American market, rare Abba soaps and dolls, a large collection of clippings and books, and original posters.

Nordin, now 48, planned to keep just three souvenirs “which do not take up much space”, including a postcard signed by all four members of the group: Agnetha Fältskog, Björn Ulvaeus, Anni-Frid Lyngstad and Benny Andersson.

On Sunday, he said he was happy with the results of the sale.

“Obviously there are certain things that did not sell. It’s very varied, but I’m very very happy,” he said.

Items which did not find buyers will be sold at an auction in the autumn, with lower list prices.

Abba dominated the 1970s disco scene with their glitzy costumes, kitsch dance routines and catchy tunes such as Winner takes it all, Money, Money, Money, and Take a Chance on Me.

They split in 1983 and have vowed they will never reunite to sing together again.