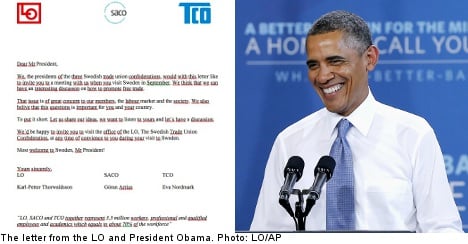 The letter, signed by the presidents of the Swedish union groups LO, Saco, and TCO, invites the US president to take time during his September stopover in Sweden to “have an interesting discussion on how to promote free trade”.

But the unions’ attempt to emphasize the value of their stance on free trade, a hot topic for the United States as it works to forge a new bilateral free trade arrangement with Europe, was marred by poor editing skills.

“We also belive (sic) that this questions (sic) is important for you and your country,” read the letter, which was published on Monday on the website of the Aftonbladet tabloid.

The letter also referred to the unions as collectively representing workers “which equals to about (sic) 70% of the workforce” in Sweden, and offered to meet the president at “any time of convience (sic)”.

SEE ALSO: Click here for a closer look at the letter

He called the letter “shameless” and a sign that Sweden’s unions “behave extremely awkwardly when it comes to the world outside of Sweden”.

“This invitation will never be taken seriously by the White House, and it would have left internationalist and linguist Olof Palme embarrassed,” he wrote in a commentary on the incident.

According to Lundqvist Dahlin from LO, the letter originated from LO headquarters, but was passed around to the other union groups for comment and suggestions.

“Things went a little too fast and unfortunately the version that was sent had several typos,” he explained.

“We should have taken more time to ensure that it was properly reviewed.”

While LO head Karl-Petter Thorwaldsson admitted the invitation was a “long-shot” to begin with, Lundqvist Dahlin refused to speculate on how the mistakes may affect the unions’ chances of securing a meeting with the US president.

President Obama will visit Sweden on September 4th and 5th before travelling on to the G20 summit in St. Petersburg, Russia.