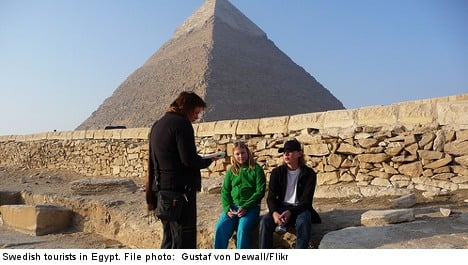 “The demand for travel to Egypt has basically died following the unrest in Cairo began,” Stefan Chatzopoulos of Swedish travel company Airtours said in a statement.

Meanwhile, the foreign ministry is examining the status of its current Egypt travel ban the day after a bloody crackdown in the capital left nearly 150 dead, according to government estimates cited by the BBC.

“I know there are discussions about that,” Lena Tranberg, a spokeswoman with Sweden’s Ministry of Foreign Affairs, told The Local of the status of the current travel warning. “But I don’t know yet what they will decide.”

On Wednesday, Foreign Minister Carl Bildt condemned the killings, warning via his official Twitter account that he feared “repression, confrontations, and violence”, adding he was “extremely concerned over [the] consequences”.

Currently, the foreign ministry advises tourists to avoid travel to Egypt, except for the transit area of Cairo’s international airport and the tourist resorts on the east coast of the Red Sea.

However, in a TripAdvisor internet forum one user staying at the Iberotel Aquamarine resort in Hurghada, a destination popular with Swedish tourists, said she had received a letter from the hotel not to leave the premises and that all excursions are cancelled.

A receptionist at the hotel confirmed with The Local that guests had been advised to stay on the premises, but downplayed the potential dangers.

On Wednesday, the Egyptian army cleared a camp of supporters of ousted president Mohamed Morsi and declared a month-long state of emergency. The military crackdown also prompted Mohammed El Baradei to resign as vice-president.

The unrest in Egypt has already caused Swedes to avoid booking vacations in the North African country, travel representatives said, adding that booking trends clearly followed reporting in Swedish press on the situation in the country.