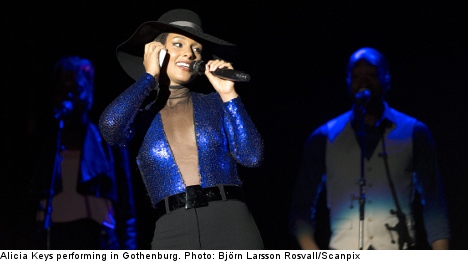 Jonna Sima, a 32-year-old Swedish journalist and editorial writer, was basking in the glow of what fans and critics alike had hailed as a top-notch performance by Keys last Saturday night at the storied music festival held annually outside of Gothenburg.

Having been separated from her friends and looking for a way to make it from the festival grounds to the city as a heavy rain began to pour down, Sima spotted some people getting in a minivan and asked if she could get a ride.

“I didn’t know who they were until I got in the van and they explained that they were members of Alicia Keys’ band,” Sima told The Local.

But what could have been a pleasant, post-concert lift back to Gothenburg with the group of American musicians quickly turned into a frightening nightmare journey.

“It became unpleasant almost right away,” she said. “I was scared; really scared.”

Sima said she felt it was safe to ask the group for a ride because the car belonged to the fleet of vehicles in use by concert arrangers Luger. In addition, the driver was also a woman, ensuring that Sima wasn’t the only woman in a car with the five other male passengers.

“It was late, it was raining, and I was either looking at a long walk alone through a darkened wooded area, or getting in a car operated by the concert organizers,” she explained.

The men quickly proposed that Sima accompany them back to their hotel, but when she explained that she simply needed a ride to meet her friends, the mood in the van changed dramatically.

“This isn’t a fucking taxi, bitch! You should be fucking grateful to be here,” one of the men shot back, according to Sima.

Sima said she tried to keep her cool and not engage with the men, but that one of the band members allegedly continued to harass her.

“Who says we won’t drag you up to our hotel and trash your pussy?” said one of the more vocal band members, who Sima recalled as being the most aggressive.

“If you don’t show some respect we’re going to kick you out of the fucking car.”

As she began to wonder whether she might be thrown from a moving car, she did her best to avoid making eye contact with the men.

“I didn’t want them to realize how frightened I was,” she said.

A short time later, the alleged abuse continued, according to Sima.

“We don’t want you anyway, bitch,” one of the men said. “Yeah, your pussy stinks,” he continued, prompting the other band members to echo the insult while at the same time allegedly breaking into laughter.

Sima’s appeals to the female driver for help fell on deaf ears, with the woman saying “it’s just boys being boys”.

When the van finally arrived at the hotel in Gothenburg after an excruciating ten minutes, Sima was afraid to get out, but was forced to disembark as the driver explained she had to return to the concert site.

She eventually left the van without incident and reunited with her friends, but remained shaken by the incident.

“I really felt threatened. It’s like they decided it was OK to harass me because I didn’t want to go to the hotel,” she explained.

“I don’t know how things are in the United States; maybe men can get away with calling women a bitch and using sexist language.”

Sima provided names and descriptions of some of the band members which The Local was able to confirm that the people who allegedly harassed her were in fact members of Keys’ band.

On Thursday, Sima publicized her story in an article on SVT Debatt, the opinion website of national broadcaster Sveriges Television (SVT).

In the piece, which generated hundreds of reader comments and prompted a lively discussion on social media, she explained how the incident was all the harder to swallow because of Keys’ stature as a “role-model” for women.

“She’s made songs like Superwoman and A Woman’s Worth that are almost considered feminist anthems,” Sima wrote.

“I’d like to think that if she knew how these men behaved that she wouldn’t want to work with them any longer,” she told The Local.

Sima also took her case to concert arranger Luger, which on Thursday issued a statement condeming the incident as “unacceptable”.

“The things Jonna Sima described were unacceptable, regardless of the context,” Luger’s Niklas Lundell told the Göteborgs-Posten (GP) newspaper.

He added that he had contacted the management team of Alicia Keys and was awaiting a response.

“We have a responsibility for what happens under the festival’s name and that of Way Out West,” he added.

“This is a problem that stretches beyond just the influence of Way Out West. Not least since this incident gives reason to think about what can be done by us, the music branch, and society itself.”

In the piece on SVT Debatt, Sima reflected on how many other women had suffered through similar incidents in connection with a concert.

“What does my experience say about the norms that rule the music world?” she wrote.

“What structures make male artists and musicians feel they have the right to treat women like objects? I think we need to talk more about how women are viewed in the music world.”