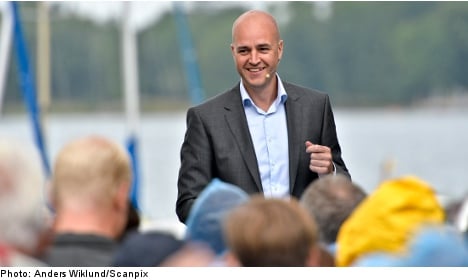 “Motivations to work matter and this is what it is about. It creates jobs,” he said.

The raft of measures proposed by the Moderates includes a further tax cut for pensioners and a raise in the threshold for the higher rate of (state) tax at an additional total cost of 3 billion kronor.

The Swedish National Financial Management Authority (ESV) and the National Institute of Economic Research (NIER) have previously warned that the scope for reform is extremely limited. But Reinfeldt believes there is room for tax cuts.

“We believe that this is responsible,” he said.

Fredrik Reinfeldt was speaking to journalists on the ferry out to Gustavsberg where he is due to hold his seventh summer speech as prime minister. The speech is a traditional prelude to the new parliamentary year and it is extra significant this year as the general and European parliamentary elections loom in 2014.

The speech will set the tone for the Moderate Party, and in turn for the government, as the election year gathers pace and will be followed by budget negotiations in Harpsund between the coalition partners.