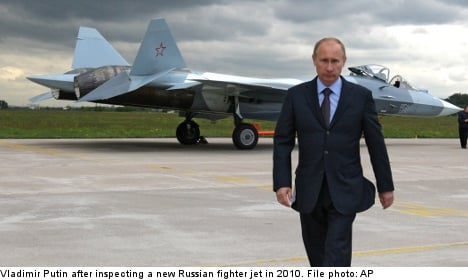 Hedlund claims that the commission’s analysis is wrong for two reasons. First, Hedlund argues that Russia is not in the process of militarizing its armed forces, and second, that Russia is turning away from authoritarian rule. The economics professor then concludes that, in light of this, the current Swedish defence budget is not justifiable.

SEE ALSO: Secret images from the skies above the Swedish border

The canopy attack is aimed at what he calls the Swedish “military industrial complex”, an inept phrase because it is miles away from Eisenhower’s description of the US military in the 1960s. Hedlund is arguably also way off target when it comes to Russian militarization and the country’s political system.

Firstly, Hedlund downgrades Russian military capabilities solely based on the failed firing of the Russian Bulava missile from submarines in 2009. While the Bulava missile has had past problems, Hedlund neglects to mention that Russia has had six successful missile launches since 2009. Also, one of the two Russian classes of nuclear submarines, which have nuclear ballistic missiles (the 955 Borei class and the 885 Yasen class), is expected to test-fire a Bulava intercontinental ballistic missile close to the Swedish border in the second half of September.

Secondly, Hedlund fails to mention that Russia conducted its largest military exercise since the Cold War days of the Soviet Union, held just two weeks ago in the Russian Eastern Military District. The exercise, aimed at improving “combat readiness” of Russian soldiers and equipment, involved over 160,000 servicemen, 5,000 armoured vehicles, 130 aircraft, 70 warships and included several aerial refueling exercises. One might argue that such a large-scale exercise is far from de-militarization.

When assessing the intent of Russian military exercises, it’s also useful to take a look at the “Caucasus Frontier 2008” exercise held in July 2008. The exercise was meant to prepare and deploy forces to South Ossetia relatively quickly. The intent of the exercise was made crystal clear just one month later. Russian forces had rehearsed the exact scenario that took place in August of 2008: the five-day war against Georgia.

Thirdly, Russian symbolic messages have become increasingly anti-Western and anti-Nato during Vladimir Putin’s third term as president. For instance, take the night of March 29th, 2013, when two Tu-22M3 Backfire heavy bombers simulated a large scale aerial bombing on Sweden. What is less known is the symbolic date of March 29th. It was the nine-year anniversary of the official Nato membership of the Baltic states. A coincidence, perhaps? Or a message to Sweden, as well as to Baltic Nato members, to be alert and not neglect their neighbours?

Fourthly, Hedlund claims that Russian military spending is likely to diminish as Russian state export revenues decrease. This is questionable. China (which is experiencing a four-month oil-demand high) is thirsting for oil and demand is likely to continue to rise. What’s more, Russia and China recently signed a $270-billion oil deal that will see China buying Russian oil for the next 25 years. Such a long-term contract is far from a “shortage of revenues”.

Also, Russian gas will continue to be a big winner, particularly with countries such as Germany giving up on nuclear energy. Finally, as the Stockholm International Peace and Research Institute (SIPRI) concludes, Russia has become one of the world’s leading arms exporters in recent years, reaching sales of $15 billion in 2012.

Lastly, Hedlund’s argument that Russia is turning away from authoritarian rule is questionable. Putin is not the first to applaud the paper-thin international legal documents concerning nuclear disarmament, missile defense, cyber war or weapons in space. In April, however, Human Rights Watch published a 78-page report to describe democracy in Russia as suffering an unprecedented crackdown against civic activism and political freedoms.

While Sweden is not Russia’s number one foe, there are plenty of reasons why Sweden should be alert when it comes to Russian militarization. And to answer Hedlund’s question as to whether the Swedish defence budget (which includes many agencies, such as the Defence Research Agency, the Defence Material Administration, the Civil Contingency Agencies, the Coast Guard, the Defence and Security Export Agency and so on) deserves 1.2 percent of the Swedish GDP?

I would argue yes, in light of Russian military modernization and continued authoritarian rule, it does.

SEE ALSO: Russians in Sweden: taming a fear of the bear

Next time Hedlund critiques the Defence Commission’s analysis, and questions Sweden’s expenditures on its armed forces, he may be wise to separate the discussion by first acknowledging Russian re-militarization, and then taking into consideration the many tasks Sweden’s armed forces are asked to carry out, beyond just keeping a cautious eye on Russia’s posturing.

Annelie Gregor is a political science PhD candidate at the City University of New York. Her thesis looks at EU and US perspectives on “Limited Warfare within Coercive Diplomacy”. Follow Annelie Gregor on Twitter.