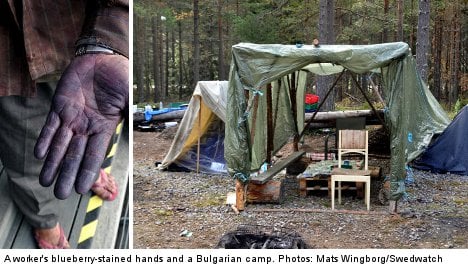 “Many of the Bulgarian berry pickers are being exploited, and we also have suspected cases where they might have been trafficked by their countrymen,” said Mats Wingborg of the corporate social responsibility watchdog Swedwatch.

“The situation is equally bad for (non-EU) Ukrainians who are here without the right permissions but are picking berries in the south of Norrland.”

IN PICTURES: Scenes from the Swedish forest during berry picking season

“We shouldn’t be naive and think this doesn’t happen in Sweden,” she said. “We’ve done a good job in combating trafficking but we haven’t really been a destination for labour exploitation, so we don’t know how big the problem is,” Engström told The Local.

She added that foreign workers’ need for an income and fear of deportation meant they were unlikely to contact authorities themselves.

“When people are struggling to stay afloat, and are happy to be working at all, it might not be very interesting to get in touch with the police or the unions,” she said.

Swedwatch’s Wingborg recently returned from the forests of central and northern Sweden. The organization will publish its new report in September, but chose to publish a few reflections and pictures from the trip.

“About a hundred Bulgarian berry pickers set up camp in July near Mehedeby in Uppland County. The tough conditions stand in contrast to the Thai workers’ orderly canteens and sleeping quarters at facilities in Västerbotten County,” Wingborg wrote, adding that the Thai workers he met had drawn up maps with place names in Thai over the northern forests.

“A Thai rice farmer has more knowledge of where to get berries in northern Sweden than the local residents do,” Wingborg noted.

The number of non-EU berry pickers reached an all-time high this year. There are 6,000 Thai nationals employed by Thai staffing companies which are in turn on contract with Swedish buyers. The workers are guaranteed a minimum monthly salary of 19,300 kronor ($2,970), which follows the guidelines in trade union Kommunal’s collective bargaining agreement. The workers are entitled to work over-time if they choose.

Swedwatch said a Thai worker could be picking up to 100 kilogrammes of berries a day, while the Bulgarians further south were averaging about 30 kilogrammes. The chain of middle-men means that not all berry pickers take home a lot of cash.

“Unfortunately, many are tricked by the middlemen,” Ovanåker municipal head Yoomi Renström told the TT news agency, adding that the foreign workers’ presence has at times created friction with the locals.

“Their big encampments mean that land owners become irritated at the litter and destruction that sometimes takes place,” she said. “They’d mostly like to evict them.”

Despite progress in the Thai workers’ situation, Swedwatch warned there were still dishonest contractors kicking about.

“Common problems are sleeping facilities that house too many people (…) or unscrupulous Thai staffing firms that take out unwarranted fees or reference incorrect exchange rates to fool the berry pickers,” the organization noted. 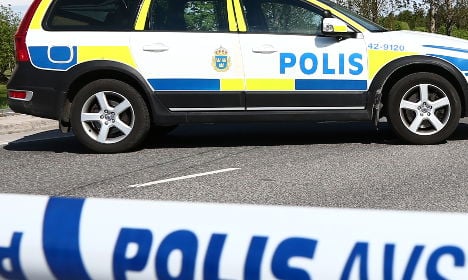 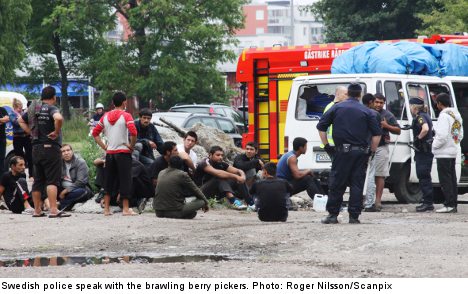 “It was clearly two gangs going at each other,” witness Niklas Wall told the local Gefle Dagblad newspaper after he parked nearby and watched the melee.

At one point, a man wearing white clothes fell to the ground where he was accosted by four men in black. While one man kicked the fallen man, two others pummeled him with what looked like piping or some other kind of bat.

“The worst I saw was the poor sod who fell and didn’t have a chance to defend himself,” Wall said. “I almost considered trying to scatter them by driving my car at them.”

The Swedish police were quick to arrive, however, with two officers approaching one group of men. From amateur video footage of the incident (embedded below), it looks like one officer dropped to his knees to illustrate to the men that they needed to stand down – which they immediately did.

“Bewteen 30 and 40 people were fighting with one another. Six people were injured and taken to hospital,” Gävle police spokeswoman Åsa de Veen told the TT news agency.

According to Gefle Dagblad, police said they had drafted in interpreters to get to the bottom of the altercation.

The berry pickers have, according to local residents, lived in the area all summer. 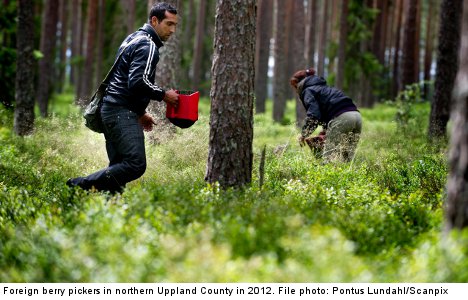