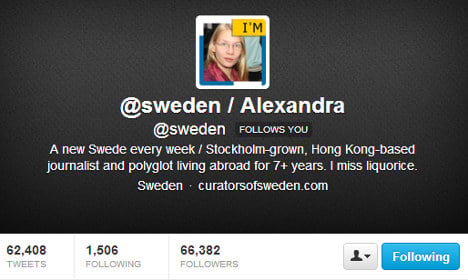 It’s estimated that there are more that 550 million active users on Twitter. At least it was, a few months ago – these things can change rapidly. In the beginning of the year, Forbes reported that Twitter was the fastest growing social media platform, and that 21 percent of the world’s internet users do in fact have a Twitter account. Although I don’t have any figures to back this up, my bet is that the majority of those accounts do not enjoy the attention of followers in numbers exceeding 66,000. Sweden’s official Twitter account @sweden, on the other hand, does.

It became immediately apparent to me as I took the helm of the account on Monday morning, Swedish time, that trying to engage and interact with the tens of thousands of people who follow @Sweden is not a simple task.

Admittedly, “crowd pleaser” is not an adjective that is commonly used in conjunction with my name. Don’t get me wrong, I’m very funny, I crack myself up over my own jokes on a regular basis—I’ve just never been very concerned with entertaining others.

Every once in a while I make meatballs. I only do it because I'm Swedish, and somehow if feels as if it's expected of me.

In my quest to keep the audience amused, I learned that you should not try to coax the followers of @Sweden to take an interest in literature or poetry. Not even Strindberg or Nobel Prize winner Tomas Tranströmer could charm more than a handful of people. My literature-loving heart broke a little. But on the other hand, random thoughts on meatballs, Moomins, moose and metro art were well-received.

The greatest entertainment success of the week must have been the image gallery I put together from photos of art in Stockholm’s metro, shared with me by the followers; The photos are relevant both in terms of Swedish culture and tourism, and @Sweden’s feed was buzzing about it for days.

But more difficult than merely amusing the followers is making sure the conversations doesn’t go astray in unpleasant directions. Social media is generally not known for being a flowerbed where sensible and respectful discussions bloom. Rather, it’s a melting pot of poorly explained statements and where the definition of “idiot” goes something in the lines of “anyone who doesn’t agree with me”. And unlike in the real world, where you have all the tools and time you need to explain your point, on Twitter you’ll sometimes only have one chance to get your meaning across, and you’ll only have 140 characters to do it.

Any topic, literally any topic, can become a ticking time bomb once you toss it into the Twitter-sphere. Come Saturday, my nerves were so frayed from trying to navigate this minefield that I didn’t even dare mention that the accurate plural form for “octopus” ought to be “octopodes” and not “octopi”. (The word derives from Ancient Greek where it had a –podes ending in plural, whereas the –i ending is a grammatical misunderstanding of Latin. Yes, it is contested, but I’ve taken sides already.)

Personally, I would be outraged if I wasn't allowed to bring my octopus to hospital when going into labor. http://t.co/PEOjWHUuAq

Not only did I not know how to explain that in 140 characters, but the ghost of Wednesday’s Great Moose/Elk debate—foolishly ignited by yours truly when arguing in favour for “moose” over “elk”—still hung heavy over my shoulders.

Ok people, I will not try to make you say moose instead of elk if you don't want to! Apparently emotions get heated when talking älg. 🙂

Of course, when it comes to moose and octopodes, no one really cares. But then there are other, real issues in Sweden and in the world, that ought to be discussed. This is the hard part, because when people disagree with you, they tend to take a piece of information and make it into something entirely different, and before you know if you’re trying to defuse a raging Twitter war over something you had no intention to discuss in the first place.

For example, early on in the week I shared tweets about #hijabupproret, an action where women put on headscarves to protest the beating of a pregnant hijab-wearing woman in a Stockholm suburb. Most reacted to the tweets in a positive way, but within minutes someone started picking a fight.

I merely wanted to highlight the issue of safety and freedom of religion in the Swedish society, and instead I found myself looking into the abyss of one unknown Twitter user’s case against the whole of Islam. We know where that would have led, because there’s nothing like arguing over religion to make people lose their wits. So instead of taking him on, I opted to ignoring him; then I had to wonder what the point of curating @sweden is if you have to tiptoe away from the important topics?

The point, I decided, is to get people talking, and hopefully they’ll keep talking when they go offline as well. And while there are certainly a fair amount of bad eggs on social media, perhaps the most important thing I’ve learned this week has been that the vast majority of @Sweden’s followers are decent, sensible folk who interact on Twitter because they want to exchange ideas, discuss issues, make friends. The trick is to not let arguments blow out of proportion, so these people can get what they came for: a conversation.

(One could argue that this could be a good time to remove myself from the keyboard.)