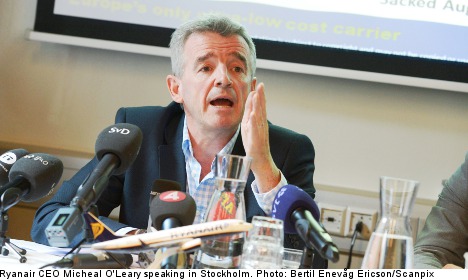 In an article published last week, the Södermanlands Nyheter (SN) newspaper described “stressed-out pilots who are forced to fly for free”, based on accounts given to the paper by Ryanair pilots who wished to remain anonymous.

O’Leary called the allegations about overworked pilots being forced to work with no pay “completely untrue”.

“Our pilots fly five days, with either three or four days off. Give me the name of the pilot who claims otherwise, then I’ll show you his flight schedule,” O’Leary added, according to the Svenska Dagbladet (SvD) newspaper.

He also denied that the airline prevented employees from joining unions before taking a swipe at the press in Sweden, theorizing the reports were a negotiating ploy by unions.

“Why is there so much crap in Swedish newspapers?” he asked reporters.

The press conference, held to announce new Ryanair routes in Sweden, came on the same day that a new report found the airline had the most outstanding repayment claims of any airline operation in Sweden.

Sweden’s National Board for Consumer Disputes (Allmänna reklamationsnämnden – ARN) found Ryanair guilty in 24 cases last year. However the airline has failed to issue compensation to the disgruntled customers in half of those cases.

A review by Vagabond and Råd&Rön magazines showed the outstanding claims amount to 66,000 kronor ($10,000).

The most common cause for complaint related to breaches of an EU law that dictates carriers must compensate customers in case of delay or cancelled flights, reported the TT news agency on Thursday.

The companies can avoid pay-outs in cases with “extraordinary circumstances”, which many carriers interpret as technical faults or bad weather. The Consumer Disputes Board and the EU, however, interprets the caveat more strictly.

Most carriers, however, according to the new review, choose to respect the Consumer Disputes Board’s rulings.