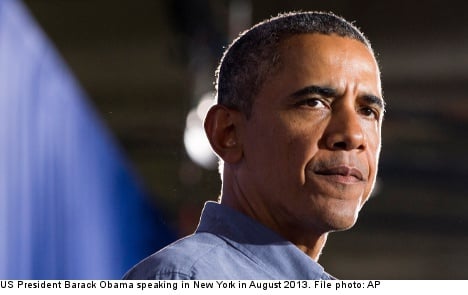 On Friday, the Swedish government released a draft of Obama's schedule for his roughly 24-hour sojourn in the Swedish capital.

In addition to bilateral discussions with Prime Minister Fredrik Reinfeldt, Obama is set to dine with King Carl XVI Gustaf before heading onto St. Petersberg, Russia, to attend the G20 summit.

IN PICTURES: See where Obama will spend his time while in Stockholm

Speaking with The Local earlier this month, Reinfeldt noted free trade, specifically negotiations for a new US-European trade deal known as Transatlantic Trade and Investment Partnership (TTIP), as one of his “key priorities” when he meets with Obama on September.

“I think Sweden is playing a crucial role in those discussions given that we are one of the strongest proponents of free trade in Europe,” he told The Local, praising the Obama administration for showing a willingness to move forward with the talks.

“It's been very interesting to follow the debate in the US because there isn't always a clear free trade agenda there. They are also often protectionist in their approach at times,” Reinfeldt explained.

“So I very much welcome the reaction from the White House and from President Obama that they were ready to open up for these negotiations. It was an important signal.

“Linking growth and trade to sustainability and to action on the climate will also be my main interests in the talks [with Obama].”

“I think Sweden is playing a crucial role in those discussions given that we are one of the strongest proponents of free trade in Europe,” he told The Local earlier this month. “We have a very large export industry with the US being a very important market to it will be one of our key priorities.”

“Half our economy is exports. This is the key to getting more jobs, creating more growth, and the US is still the largest economy in the world,” he said, admitting that sometimes Sweden's stance on trade puts them closer to the United States than to other member states in the European Union.

“We are on the side of being very pro-free trade in a Europe where you can sometimes find more calls for protectionism,” Reinfeldt told The Local.

Indeed, the arrival of Obama in Stockholm for the first bilateral meeting with a sitting US president on Swedish soil represents a high point in a US-Swedish relationship that hasn't always been chummy.

In 1968, the US recalled its ambassador from Sweden after Olof Palme, who was then minister for education, marched through the streets of Stockholm with ambassador from North Vietnam to protest US military action in Vietnam.

In recent years, however, Sweden has been seen as a potential role model for the United States in areas ranging from promoting green tech innovations to its success in emerging from its own banking crisis in the early 1990s.

Sweden has also been a steady partner of Nato, contributing to operations in Afghanistan and Libya, another factor cited by experts as helping bring to fruition a visit that has long been a wish of Reinfeldt, as well as current US ambassador Mark Brzezinski.

“Sweden is today NATO's closest friend,” international affairs expert Erik Brattberg, a visiting fellow at the Center for Transatlantic Relations at SAIS Johns Hopkins in Washington, DC, who is also affiliated with the Swedish Institute of International Affairs in Stockholm, wrote in an opinion piece published on the Huffington Post.

“It is one of the most important partners to the alliance, leading the way towards a new and closer tie for partners in and outside Europe.”

He added that Obama's visit to Stockholm was hardly a “hastily arranged” back up following the White House decision to cancel a previously scheduled meeting with Russian President Vladimir Putin in Moscow.

“Obama's visit to Sweden is not accidental. In fact, a presidential visit had been planned for quite some time, and is indicative of the historically close US-Swedish relations,” Brattberg wrote.

While Reinfeldt is keen to show off his country's achievements in climate-friendly technology innovation and sustainability during Obama's visit, which also includes a dinner with leaders from Sweden's Nordic neighbours, the rapidly developing situation in Syria threatens to sideline discussions of trade and clean tech.

Swedish news agency TT reports that Syria will also be on the agenda when Obama arrives in Stockholm.

There has also been speculation that Obama's visit may be scrapped depending on developments in Syria. However, Reinfeldt told reporters on Friday that Washington has indicated that the president still plans to come to Sweden.

“Based on what they know now, the president's plans to travel to Stockholm and then St. Petersburg haven't changed,” he said during a press event in Gävle, eastern Sweden, according to the Aftonbladet newspaper.

“But I think everyone understands that we must follow developments in Syria. When it comes to the president of the United States, things can always change at the last minute.”