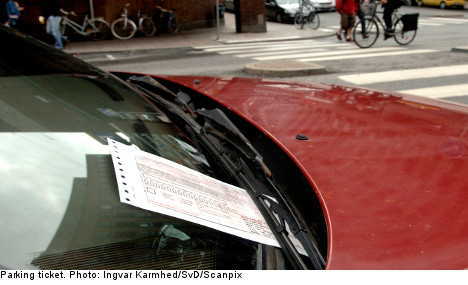 The report published by news agency Siren listed the top 20 parking offenders in the country as recorded by the Swedish enforcement office (kronofogdemyndigheten). Out of the 20 offences, 14 of them were committed by drivers based in Malmö.

According to the transport board (transportstyrelsen) the record offender has not been in possession of a proper driver’s licence for over three years.

A change in the law is now being mooted to prevent similar large fines occurring in the future. If the proposal is passed it would mean that the parking liabilities would be recorded on the cars rather than the owner.

“We have been involved and contributed to this law. It’s about getting access to the people who have been using this system to the highest degree,” said Börje Johansson of the Swedish enforcement service to the Siren news agency.

The report adds the worst offenders have fines ranging from 60,000 kronor ($9000) to several million.

Last year it was reported that foreign diplomats from embassies in Sweden had racked up over 600 unpaid parking tickets and owed 400,000 kronor ($59,642). However, Swedish law means they are able to escape the fine as diplomats have immunity.