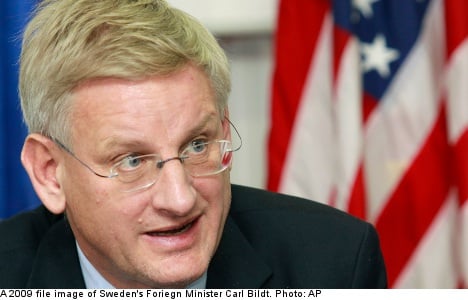 In an interview with Dagens Nyheter Carl Bildt said he agreed with America that Syrian government forces are behind the recent chemical weapon attacks.

“We reported early on that it was an attack by regime forces using deadly chemical substances. It’s clear that there must a reaction to this.

“We think that it was important to get UN weapons inspectors on the ground in Syria and also important that they can submit their report as we hope to reach something within the UN security council,” he said.

Bildt had tweeted on Friday that he is “consulting further with my Nordic and Baltic FM [foreign minister] colleagues on Syria situation.”

US President Barack Obama said on Friday he had yet to make a final decision on how to intervene in Syria but a “limited, narrow” military response was likely.

Obama, who is due to visit Sweden next week, added; “We’re not considering any boots on the ground approach. What we will do is consider options that meet the narrow concern around chemical weapons.”

Bildt said in his view there is little difference between Sweden ad America’s view of what to do about the situation.

“We’ve always emphasized that there is only a political solution. I don’t think that the U.S has said anything else really but perhaps we said it a little louder from the EU side.”

The former prime minister added the maintaining the credibility of the United Nations was essential regardless of what happens in Syria. He added that he “saw no other possible explanation” that it was government forces who carried out the chemical weapons attack.

When asked how Sweden would react if the U.S did launch an attack he said; “We have no reason to consider such things in advance.”

On Friday British foreign minister William Hague cancelled his planned trip to Stockholm, where he was due to meet Bildt, to remain in Westminster and focus further on resolving the conflict in Syria.

Intelligence reports issued by the White House suggested that 1,429 people were killed by a chemical weapons attack carried out by the Syrian government on August 21st.

Syria said the American claim was “full of lies” and claimed rebels carried out the attack.

Barack Obama will arrive in Stockholm on Wednesday.