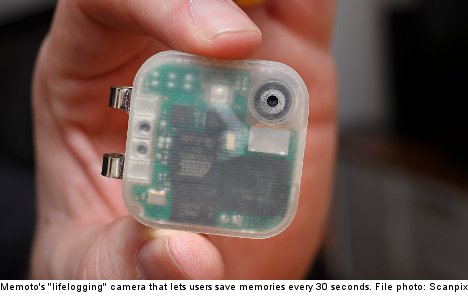 When Källström was a young adult, he lost both his parents to cancer. It became a spur for him to seize the day, as a person and an entrepreneur.

The result: A lens with no off-button that captures every moment of your

The 38-year-old co-founder of Swedish company Memoto is a man in a hurry as he promotes his “lifelogging” camera, which is worn with a clip on the shirt or on a string around the neck, and takes a picture once every 30 seconds.

“When you lose your parents, you realise that you don’t live forever. It has definitely affected me in my entrepreneurship. I can’t wait until later to fulfil my dreams, I have to live my dream now,” he said.

Some may see parallels with George Orwell’s 1984, the Truman Show or other dystopias. But the team behind the Memoto camera insists that it doesn’t breach any privacy. Rather, they see it as a way to collect memories.

“Traditionally, people only brought their camera to special events when everyone was dressed up, smiling into the camera,” Källström said.

“But you don’t know in advance which moments will be important in the future. Perhaps you meet your future wife or witness an accident or a crime, pictures you might want to return to.”

Lifelogging, a technique for digitally gathering daily moments, is a growing phenomenon, gaining popularity with mobile applications such as Saga, which creates info graphics summarising your life through your smartphone data, and health trackers like Runkeeper and Moves.

Following the success of calling software Skype, music streaming service Spotify and video game developer Dice – all technologies with a heavy Swedish component – the next big thing could be a device logging your life in pictures.

The Memoto camera, which resembles an iPod mini, collects a stream of pictures, automatically sorted according to the GPS-location, time and light.

It is a tool for a new tech-savvy world without the patience to keep a diary, according to co-founder Oskar Kalmaru.

“I’ve failed several times when trying to write a blog or travelogue. Older relatives managed to keep a diary over 20 years, but it is hard with the routine,” he said.

British lifelogging camera Autographer emerged in the medical field as a facilitator for Alzheimer patients and GoPro and Looxcie are targeting practitioners of extreme sports.

Memoto will cater to both exhibitionists or nostalgic souls, according to Källström.

“There are two main types of users,” he said.

“The first category, to which I belong, is the collector who saves and organises the memories, but only shares them with a small circle of close friends and family. The other group is more social, aiming to share a creative and active life through various social media platforms.”

But classmates, employees and neighbours may not want to be caught on film,

Lifelogging does raise some privacy questions, says Steven Savage, a researcher at the Swedish Defence Research Agency, noting that the private sphere is relative: what is not offensive to one person might be to another.

“It depends where the photos end up,” Savage said.

“Today, it is difficult to search pictures, but new technology is being developed all the time. Once those pictures become searchable, more questions will arise. You’ll lose control over the situation.”

Jan Svaerdhagen, who is currently writing a book about lifelogging, agrees.

“The first question one should raise is ‘what function is filled by taking a photo every 30 seconds’? Who buys the product and for what purpose? Are we entering the next stage of social media where we not only log, but also share our lives 24/7 in a kind of Big Brother Light version?” said Svaerdhagen.

“I jog a lot, and sure it would be fun to have some photos from a run, but the question is, are we entering narcissism in its most extreme form?” he said.

Källström said he and his team thought a great deal about privacy while designing the camera, bearing in mind that many might be uncomfortable with being confronted with a spying eye.

“It has to be clear that it is a camera, but yet with a friendly design that makes people comfortable and not distracted,” he said.

Soon, 4,000 of these cameras will reach their users. In the future they might develop accessories such as a waterproof case, a wide-angle lens and a wi-fi dock. In the meantime, the blueprint is available online for creative users to personalise their camera.

“The lifelogging cameras are just the tip of the iceberg in the ‘quantified self’ movement,” said Lisa Ehlin, an expert in digital culture at Stockholm University.

“I’m sure we will walk around with some cool new gadgets in the future, like those mouth chips or body tattoos tracking your health and what you eat. But mainly, it’s all about social life and friends.”