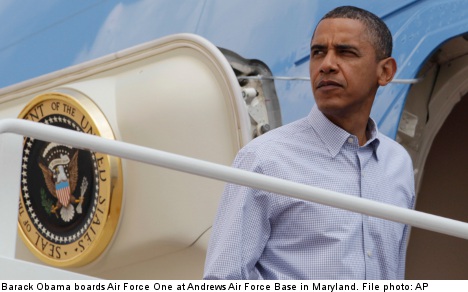 When Obama visits the Swedish capital on Wednesday and Thursday, motorists and public transport users can expect a chaotic day.

The E4 highway from Arlanda airport will be completely shut down from the moment Air Force One touches down on Swedish soil.

“It’s quite a big escort, 40-50 vehicles, and it will take a while, maybe 15-20 minutes just to get the roads completely clear,” Kjell Lindgren of the Stockholm police told reporters on Monday, according to the Dagens Nyheter (DN) newspaper.

All on and off ramps along the motorway will also be closed to traffic. The delays will be carried over to the city’s subway system as the convoy passes overhead.

“It will be a pause that lasts just as long. But it just means that you’ll be left standing at a station for a while,” Lindgren added.

RELATED STORY:Click here for a breakdown of itinerary for Obama’s visit

Lindgren added that it will likely be the largest interference to public transport that Stockholm has ever seen.

There will also be heightened security around Sweden’s government offices, Rosenbad, where Obama will meet with Prime Minister Fredrik Reinfeldt. The same goes for the Great Synagogue of Stockholm and the Royal Institute of Technology (Kungliga Tekniska Högskolan, KTH) where the pair will visit for a half hour on Wednesday, taking a look at clean energy innovations.

Authorities at Stockholm City have warned that there is no point bringing the car to work on either Wednesday or Thursday.

“The car is not a good option for this period. We are being very clear about this,” Mats Freij, spokesman at Stockholm City, told Sveriges Television (SVT), adding that any cars parked illegally risk being towed.

In some areas around town, even cyclists and pedestrians will have to find other routes.

During Obama’s journey back to Arlanda on Thursday afternoon’s to board Air Force One and head to St. Petersburg, Russia, the E4 will be closed again.

PARTNER CONTENT
Still struggling with Swedish? Here’s how to accelerate your learning
Url copied to clipboard!