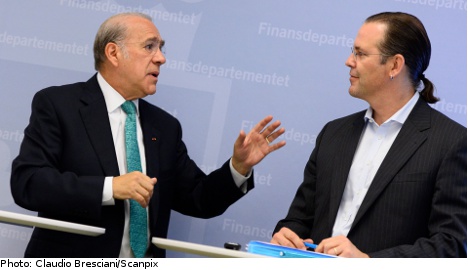 Gurría said that the relatively healthy state of the Swedish economy affords scope for a stimulus package, while repeating a warning, raised in a 2012 OECD report, over the high levels of household debt.

“This is a paradox, it is usually that public debt is high and the private is low. Here it is the opposite,” Gurría said, while noting that the long period of low interest rates is an explanatory factor.

He underlined the importance of keeping a check on household debt and spiralling house prices and of addressing the problem of supply and demand in the housing market.

Borg argued in response that the Swedish government indeed does have a check on the situation.

“We concur with what the OECD says and recommends,” Borg said, stating that the government is prepared to take measures if the situation remains the same in six or 12 months time.

Gurría however reserved praise for the Swedish economy and observed that national debt had declined to levels which few others have managed to achieve, thereby affording scope for stimulus.

In a general comment on the European economy, Gurría stated that there is grounds for optimism although unemployment has increased and remains at a high level.

He reserved special mention for the high level of youth unemployment, an area Sweden has long grappled with.

“We are not delivering,” he said warning that there is a risk that the situation will lead to resignation among young people.

Borg, who has been Sweden’s Finance Minister since 2006, was praised in 2011 by the OECD for managing an economy as strong as the Pippi Longstocking – “the strongest girl in the world” and a children’s favourite invented by Astrid Lindgren.

Borg’s recently presented autumn budget, coming a year before the general election, has however received criticism for under-funded largesse after proposing 25 billion kronor ($3.8 billion) in reforms and tax cuts.

The Local reported on Monday that one Norwegian newspaper had described the budget as the “equivalent of giving Pippi Longstocking amphetamines”.