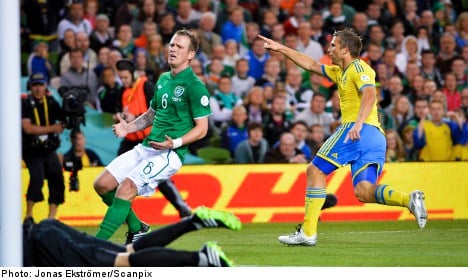 On his record equalling 143rd cap, the 37-year-old Svensson helped the visitors come from behind to beat an Ireland side who simply couldn’t afford to lose ground in the race to reach next year’s finals in Brazil.

Robbie Keane, with his record 60th international goal, had given the hosts the perfect start, but Johan Elmander equalised before half time.

Thanks to Svensson, and the increasingly influential Zlatan Ibrahimovic, Sweden stole all three points with an improved second half showing.

Ireland travel to Austria on Tuesday knowing their World Cup qualifying Group C fate is now out of their hands, while Sweden visit Kazakhstan in the knowledge that victory will put one foot in the playoffs.

It is a major blow to Ireland manager Giovanni Trapattoni, who had publicly declared the need for four points from this double header.

Sweden boss Erik Hamren will feel justified with his decision to start Svensson, despite having Kim Källstrom available, but it would be hard to ignore the contribution of Ibrahimovic, who has scored 14 goals in his last 12 games for Sweden, but was happy to play the role of creator tonight.

With the two teams, as well as Austria, level on points going into this round of fixtures, both sides spoke of playing to win and a packed stadium helped Ireland roar into action, with Shane Long, Glenn Whelan and Jon Walters all firing shots on goal inside the opening 15 minutes.

Sweden struggled to get time on the ball and two long range free kicks, both smacked into the defensive wall by Ibrahimovic, were all they had to show in the same period.

The hosts were playing with confidence and though James McClean’s cross that hit the bar had some fans on their feet, Keane lifted the roof in the 21st minute.

The LA Galaxy forward pounced on a poor back pass by Mikael Lustig, and poked the ball around Andreas Isaakson in the Swedish goal only to see it roll agonisingly toward the post.

The 33-year-old gave chase, though, and when Mikael Antonsson failed to adequately clear, he thumped home from an angle to give Ireland a deserved

Sweden responded well, with Elmander first to draw a save from David Forde while Sebastian Larsson should really have levelled things on the half hour but he headed wide after a wonderfully timed run from midfield to latch onto an Ibrahimovic cross.

The visitors didn’t have to wait long to celebrate though, and when the goal came it was worth waiting for – with Lustig’s wicked cross bulleted past Forde by Elmander in the 33rd minute.

Sweden had looked vulnerable for much of the first half, but as he dropped deeper Ibrahimovic began to control things.

In the 57th minute Ibrahimovic showed his class once again as he set up Svensson for a shot that beat Forde at his near post to give Sweden the lead.

Ireland could have equalised had Shane Long spotted Keane free at the back post after John O’Shea had put him clear, but the West Brom forward squandered the opportunity and the skipper’s frustration summed up Ireland’s night.

some really good chances. I am really satisfied,” Hamren added.

“We had the fight and attitude I wanted to see, if you take away the first

20 minutes. We showed strength in the team.”

Giovanni Trapattoni refused to give up on Ireland’s World Cup dreams despite the defeat on home soil. The veteran Italian coach, who led Ireland to a first major tournament in 10 years when they qualified for Euro 2012, had insisted his side needed four points from the two games.

But with three now the maximum return, he was in defiant mood post-match.

“We play Austria next and Sweden must play in Kazakhstan, and after that they have Germany too, [so] there is an opportunity,” he argued.

Trapattoni left the pitch to a chorus of boos from a packed Lansdowne Road,

but had no intentions of walking away from the job, insisting that he’d stay on for Euro 2016 if the Football Association of Ireland (FAI) allowed him.

“If I look at what we did in the last two years then sure I want to stay, but it is not my duty. It is up to the federation.”