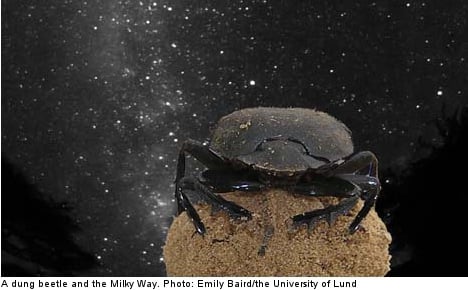 The annual award ceremony celebrates research discoveries that make people laugh and then think. Winners travel to the ceremony in Boston at their own expense with the Swedish success story coming from the University of Lund.

“It’s a fantastic honour and we’ve got a great reception over here,” award winner Marie Dacke told The Local after claiming the joint prize in biology and astronomy.

Assistant Professor Dacke, who is from southern Sweden, worked with four other colleagues from the University of Lund on the improbable discovery.

“We were out in the field looking at some dung beetles and it became apparent that they were able to find their way in the dark using the Milky Way.

“The Ig Nobel organizers liked the fact that we did research out in the field and also in the planetarium with the dung beetles which brought us to their attention,” said Dacke.

When asked if the dung beetles were more clever than they are given credit for Dacke laughed and said: “I think most insects are much more intelligent than we think”.

“They use their little brains in clever ways like being able to get around by using the Milky Way. They are very capable.”

Other winners included Belarus President Alexander Lukashenko who won the Peace Prize for making it illegal to applaud in public. A French research team won the Psychology Prize for ‘Beauty Is in the Eye of the Beer Holder’ which confirmed that people who think they are drunk also think they are attractive.

“It is more for the honour and being a part of the wonderful ceremony. We did get a one trillion dollar bank note from Zimbabwe which I don’t even think is enough to buy a cup of coffee over there!” quipped Dacke.