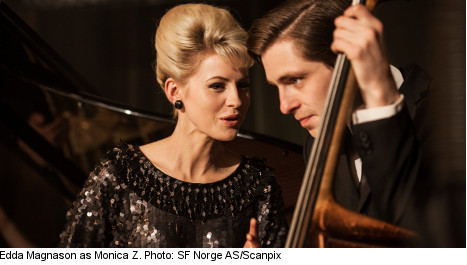 Monica Z is a $5.6 million movie based on the life of Swedish jazz legend Monica Zetterlund, and starring silver screen newcomer Edda Magnason.

After a line of hit Swedish films with rather dark, dramatic premises – think vampire thriller Let the Right One In and The Girl With the Dragon Tattoo – the film has a milder feel, most likely because Zetterlund is a beloved part of the Swedish legacy.

"Zetterlund is like meatballs and Pippi Longstocking – a part of the Swedish national soul, a symbol of nostalgic Sweden," actress Magnason told Swedish online magazine Cineuropa.

Zetterlund, who died in an apartment fire in 2005 aged 67, was one of Sweden's most famous artists. She sang in both English and Swedish, and was the classic example of a small-town girl with big dreams and a healthy dose of ambition. After taking the jazz scene by storm in Stockholm, she got a taste of New York with the likes of American jazz musicians Bill Evans and Peggy Lee.

But, as with many starstruck careers, the glitter and glam wasn't without its toll. Monica struggled with stage fright, scoliosis, alcohol abuse, and a strained relationship with her daughter.

"The story of Monica is the modern dilemma of fame – a living legend deeply cherished and loved by the Swedish audiences, yet unable to find love herself," Danish director Per Fly told Cineuropa.

Zetterlund's life has already been presented as a documentary both on radio and TV, as well as in an autobiography and various biographies. But this film, which is currently only available in Swedish, is the first time that new life has been breathed into the beloved Swedish artist.

Swedish southern belle Edda Magnason has never acted in her life, but auditioned on a whim and beat off 75 other actors vying for the role.

Magnason, who is primarily a singer and song-writer and is about to release her third album, had no ambitions to act and auditioned just for fun. But she kept getting called back and each time she got deeper into the character.

Magnason has a striking resemblance to Zetterlund, not just in appearance and voice, but in her background as well. Both were born and raised in small country towns and relocated to Stockholm to pursue their careers.

They both started off with music, releasing albums in their twenties, before dabbling – and thriving – in the medium of film. And perhaps most importantly, they both have that extra something – an air of cool, sophisticated glamour mixed with warm joy, and just a touch of childlike mischief.

"I can relate to her a lot," Magnason told the Expressen newspaper.

"There was a seriousness in her and maybe that was why she was also so funny. I see myself in her in that she also came from the countryside, or a smaller town, where you're not as afraid."

Magnason, half Icelandic but born and raised in Skåne, is already being called the rising star of the year, and her name has been mentioned in Guldbagge circles – the Swedish equivalent of the Oscars.