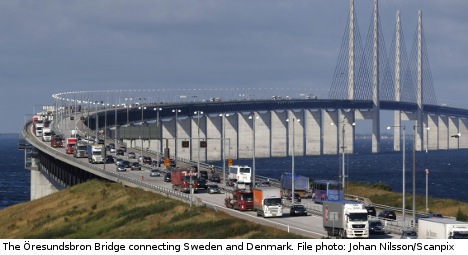 The light manifestation will be focused on the man-made island Peberholm in the middle of the Öresund straight and along the bridge itself.

“Öresund was the route to safety in October 1943. It is a beautiful idea, to use the foundation of the fixed link over the Öresund, which rests on Peberholm, as a platform for all the lanterns we want to light in the October darkness,” said Ingeborg Philipsen at the Museum Amager in Denmark.

Some 700 lanterns will be lit on Peberholm to symbolize that “October 1943 was a light in the darkness”.

The Danish Jews fled to Sweden not over a bridge but in an armada of boats after they had received information of a pending deportation to the Nazi concentration camps.

The Elisabeth K571 is one of the few vessels which remain from that fateful October night in 1943 and the boat, which is now part of the Museum Amager exhibition, will take part in remembrance activities.

Some 7,800 Jews were evacuated to Sweden helped by the Danish resistance movement and large number of Danish and Swedish fishermen.

Only around 450 Jews were ever caught by the Gestapo in the round up ordered to coincide with the Jewish New Year on the night of October 1st 1943. Some 99 percent of Denmark’s Jewish population survived the war.