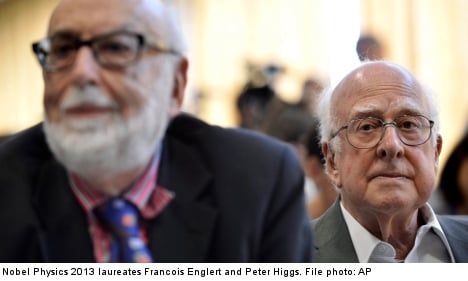 The two were awarded “for the theoretical discovery of a mechanism that contributes to our understanding of the origin of mass of subatomic particles”.

The discovery, made at the Large Hadron Collider (LHC) operated by the European Organization for Nuclear Research (Cern) in Switzerland, has been described as one of the most important scientific finds ever.

“If you ask me, this was the most beautiful experiment ever done,” Björn Jonson, a professor of physics at Chalmers Institute of Technology in Gothenburg and a member of the Royal Swedish Academy of Sciences, told The Local following Tuesday’s announcement.

“As one of the Cern directors told me once, ‘A moon landing is nothing compared to this.'”

Professor Englert was thrilled with the news when reached by telephone during the announcement.

“You may imagine that this is not very unpleasant, of course. I am very, very happy, to have that recognition of this extraordinary reward,” he said to a chuckle from the crowd.

He added that he planned to pass on his congratulations to Professor Higgs, who could not be reached by the academy for comment and has been in hiding all day, according to Swedish media.

“I’m going to congratulate him of course, because I think he did very important and excellent work,” Englert told The Local’s David Landes, adding that he had never met Professor Higgs until the July 4th conference at Cern last year.

Later on Tuesday, Higgs issued a statement through Edinburgh University, where he is an emeritus professor.

“I am overwhelmed to receive this award and thank the Royal Swedish Academy,” the statement read.

“I would also like to congratulate all those who have contributed to the discovery of this new particle and to thank my family, friends and colleagues for their support. I hope this recognition of fundamental science will help raise awareness of the value of blue-sky research.”

The pair of professors independently proposed the winning theory back in 1964, with Englert working together with his now deceased colleague Robert Brout.

Their work, however, was not confirmed until last year when the Higgs particle was discovered at Cern, which National Geographic magazine once described as “a setting that calls to mind the subterranean lair of one of those James Bond villains” – as it is 300 feet underground.

The theory proposed by the laureates is a central part of the Standard Model of particle physics that describes how the world is constructed, the committee wrote.

Englert told the crowd at the Stockholm Royal Swedish Academy of Sciences that he remained unsure what he would do with the prize money.

The prize money was downgraded by 20 percent last year, with the award-givers citing the financial markets’ ill health for the cut in cash. Until 2010, the laureates got to share in total 10 million kronor ($1.6 million), but since last year it has been 8 million kronor. The money comes from the pot of gold that Nobel set aside specifically for the prizes.

François Englert was born in 1932 in Belgium, and has a Ph.D from the Université Libre de Bruxelles, Brussels, in Belgium. He is now Professor Emeritus at the same university.

Peter W. Higgs is a UK citizen, born in 1929 in Newcastle upon Tyne. He studied at King’s College, University of London, and is the professor emeritus at University of Edinburgh.

Swedish Royal Academy member Jonson explained that the names of Higgs and Englert have been circulating among Academy members since August, although the final decision to award the pair the Nobel Prize in physics was made on Tuesday morning, with about 100 members present.

The announcement was delayed three times and the winners revealed one hour later than the initial plan of 11.45am. The academy did not initially explain the reason behind the delay, but the committee’s website announced that “The Academy is still in session” as the crowd waited.

When asked about the delay, Jonson refused to comment, explaining that Academy proceedings are kept secret for 50 years. However, he said that on one occasion, back in 1912, the Academy at large went against the Nobel Committee’s recommendation.

Some observers theorized that the Academy was wrestling with if and how Cern as an institution could share in the 2013 Nobel physics prize. While Jonson refused to offer any details on if and how that discussion came up during the Academy’s deliberations on Tuesday, he said that “theoretically” an institution could share in a Nobel physics prize, but that it hasn’t ever happened.

The news comes after two Americans and one German won the Medicine Prize on Monday for their research into cell transportation systems.

Follow our live blog of the Nobel week here .