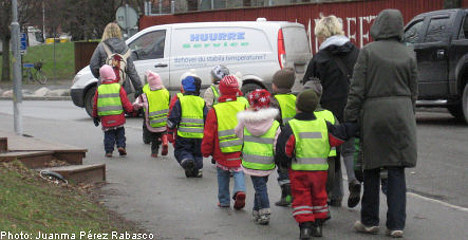 With the exception of two children who were one-year-olds and in push chairs, all of the young Malmö passengers were between the ages of 2.5 and 5.

When the bus driver complained that their ticket was 30 kronor short of a full fare, he made all 22 passengers disembark. The adults then led the children back to their pre-school – a walk of roughly 4 kilometres that took over two hours to complete.

“This doesn’t make sense. 19 children at this age shouldn’t walk so far in traffic. But they were very good, but the parents were extremely upset when they heard about it,” teacher Carina Klang-Christensson told the Sydsvenskan newspaper.

She blamed the driver for providing incorrect information, informing the adults that a “duo ticket” counts for an adult and two children, when in reality it should count for an adult and four children. In total, and taking into account the duo tickets, the money the pre-school had should have been enough for a so-called Jojo ticket – but not according to the driver.

A spokesperson for Skånetrafiken, the company responsible for the bus, apologized for the incident.

“This has gone completely wrong, and I can only apologize,” the spokeswoman, Ulrika Mebius, told the Sydsvenskan newspaper.

“The driver gave the wrong information about the prices. It was probably due to this that the total money didn’t add up for the Jojo card.”

The driver has now been called in to the company headquarters, Mebius added, and the children are likely to get ice-cream, or some other similar form of compensation, reported the paper.