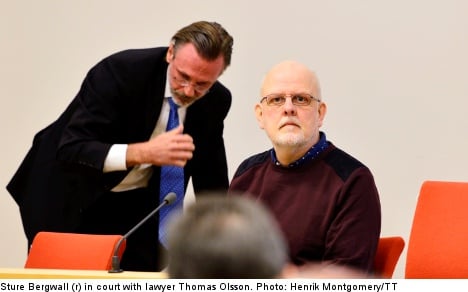 “It feels tense but I’m hopeful. I hope the court makes a wise and well thought out decision,” he told reporters outside the courtroom before the hearing began.

Bergwall had confessed to dozens of murders committed between 1994 and 2001. He was found guilty of eight of them until he dramatically withdrew his confessions in 2008 and was subsequently cleared of all charges.

The last conviction was overturned in July 2013, five years after Bergwall first recanted about his alleged participation in the brutal killings.

He has been held at the high-security Säter psychiatric hospital for the last 20 years after he was put away for robbing a bank. He has demanded that the administrative court end his psychiatric care, a move opposed by the clinic’s chief physician.

On Monday, the Administrative Court (Förvaltningsrätt) in Falun in central Sweden heard from two new experts on the matter, as well as the chief physician at Säter, Vladislav Ruchkin, in a hearing to determine whether or not Bergwall should be released.

“If you put aside the eight murders, there is still a risk for a relapse into sex crimes,” Ruchkin told the court.

He explained that many years ago Bergwall had contact with minor children for sexual purposes. The doctor also brought up child pornography suspicions against Bergwall from the 1990s and his long battle with prescription drug abuse.

The court rejected a request by Bergwall and his lawyer that the court appoint an independent medical expert to carry out an examination of his mental state, calling such an assessment “unnecessary”.

“The Administrative Court lacks competence to judge whether Sture Bergwall is mentally ill,” Bergwall’s lawyer Thomas Olsson pointed out, arguing the court owed his client a new assessment independent from the clinic’s.

Olsson claimed that his client’s condition worsened during his time at Säter, where he was heavily medicated, and that the murder convictions were a result of his treatment.

“Sture Bergwall became ill from the treatment he received,” Olsson told the court.

“That first notes in his medical file that I have here show that the therapy was clearly a driving force to obtain confessions.”

Bergwall said in a recent interview with GQ Magazine that he confessed to the murder spree as a result of being drugged up and his unwillingness to be released from detention as his sentence for a robbery ran out.

Following a high-profile police investigation it was found that Bergwall had no connection to any of the murders to which he had confessed. He admitted that his interest had been piqued by reading newspaper articles about unsolved murders.

Speaking with Sveriges Television (SVT) prior to the hearing, which was expected to last all day, Bergwall expressed his appreciation for the interest in his case.

“It is good that the media is in place and also that the family is in place. That is what is most important. With the support of family and friends I look forward to the future with confidence,” Bergwall told SVT.