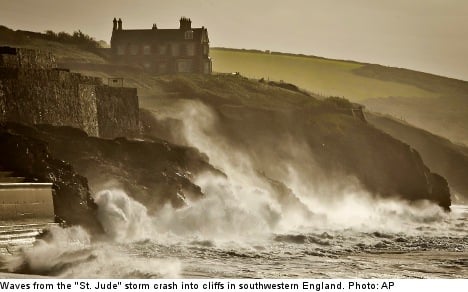 According to forecasts from Swedish weather agency SMHI, the storm is expected to reach Sweden’s west coast on Monday afternoon, bringing violent wind gusts of up to 165 kilometres per hour.

“People should stay indoors. Loose items and trees may be blown away. Public transit and electricity may also be knocked out,” SMHI meteorologist Lisa Frost told the Aftonbladet newspaper.

SMHI has issued class 2 warnings for most of southern and western Sweden, from the Skagerack and Kattegatt straits off the west coast, inland through Skåne, Västra Götaland, and Halland Counties, as well as parts of Jönköping and Kronoberg Counties. The Baltic islands of Gotland and Öland are also included in the warnings.

“It’s going to be extremely windy overnight into Tuesday, a really awful storm. The silver lining is that it’s passing through at a time when most people are indoors,” Frost told the TT news agency.

The impending rough weather has prompted several passenger rail lines to be cancelled in southern Sweden, including the following routes: Halmstad-Värnamo, Kalmar-Hultsfred, Karlskrona-Kristianstad and Malmö-Simrishamn. A number of cargo rail routes will also be shuttered due to the “St. Jude” storm.

“More routes might be cancelled. Right now we are planning rail traffic for the west and looking at whether there are routes that need to be closed. But the forecast for the storm can change,” Jonas Bengtsson of the Swedish Transit Agency (Trafikverket) told the TT news agency on Sunday night.

Electricity providers in Sweden are also bracing for the storm’s arrival, ensuring that repair crews are standing by.

In the UK, the storm disrupted the Monday morning commute in southern Britain, and spawned 18 flood warnings in southwest England, the BBC reported.