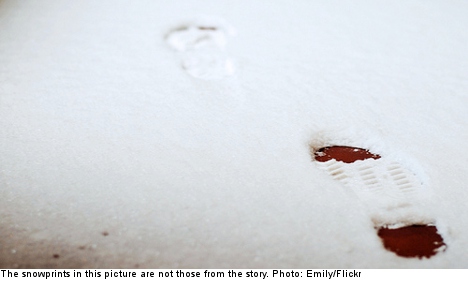 The theft took place in Boden, far northern Swedne, in the early hours of Sunday morning. Police suspect that the thief was keen on getting medical supplies which are stored at the facility. However, it remains unclear what exactly was stolen.

As well as leaving his fingerprints the burglar left something else which made the police's job capturing him easier – his footprints trod into the fresh snow.

"We tracked him to his address. He hadn't counted on the fact that it had snowed during the night," said local police officer Erik Kummu to the Norrländska socialdemokraten newspaper.

The thief's apartment was only a short walk from the scene of the crime. When police arrived they found the suspect whose footprints matched those left in the snow.

He was subsequently arrested and a prosecutor will decide if the burglar receives a further punishment.

Perhaps the thief hadn't seen the movie The Shining where Jack Nicholson's son manages to evade his father by retracing his steps in the snow.