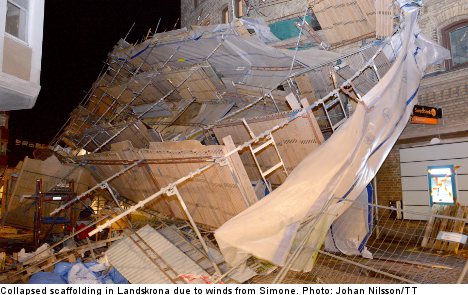 The deadly storm, which wreaked havoc in the UK, France, the Netherlands and Germany, claiming at least 12 lives, blew across Sweden with wind speeds up to 151 kilometres/hour.

"It's like the Second World War out here," Helsingborg resident Mattias Asp told the TT news agency after returning home to find a chunk of his neighbour's roof had blown off and landed atop the roof of another house nearby.

Close to 80,000 homes had their power knocked out by Simone, including 74,000 customers of power company Eon.

IN PICTURES: See more images of Storm Simone in Sweden

"It's a very serious storm and the damage is extensive," Eon spokesman Mattias Hennius told TT on Monday night.

"A clear majority [of our customers] will be without power overnight."

As of Tuesday morning, around 62,000 Eon customers across southern Sweden remained without power.

Storm St. Jude, as it was originally called in the UK, was dubbed Simone in Sweden, in accordance with the Scandinavian name-day calendar, as the name Simone falls on October 28th.

Police and emergency crews in Skåne had a busy evening as Simone's strong winds left roads littered with fallen trees and power lines, as well as trucks that had been left on their sides by gusts.

Rough seas also left a Stena Alegra passenger ferry operated by Stena Lines aground off the coast of Karlskrona with 33 crew members on board.

Despite the strong winds, widespread damage to homes and power lines, and a number of minor traffic incidents, few serious injuries were reported.

"It's been pretty manageable. There were a number of trees that have blown down and around 8pm there was a car that drove into a downed tree, but to the best of our knowledge there haven't been any reports of serious injuries," Per Bäckström, duty commander with the Gotland police, told TT.

Mikael Erkki with police in Kalmar and Kronoberg counties concurred.

"Things have gone quite well. I think people listened to the warnings and haven't been out on the roads," he told TT.

By Tuesday morning, Simone had dissipated considerably as it moved across to Sweden's east coast and out toward the Baltic, although hurricane-force gusts over 115 kilometres per hour were measured on the Baltic islands of Öland and Gotland.