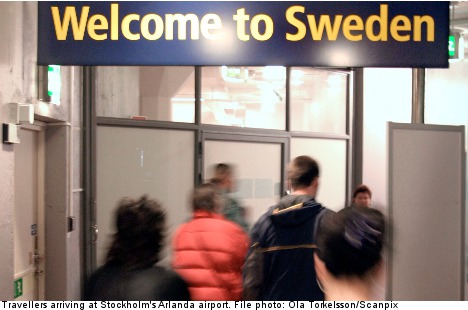 The survey was carried out on behalf of the European Commission, with over 40,000 people across Europe rating how satisfied they are with their own cities.

According to the report, 88 percent of Stockholmers think the presence of foreigners is good for a city while in Malmö that figure is 78 percent.

However, there was a significant difference in perceived integration levels, with Swedish respondents overwhelmingly stating that they didn't think immigrants were well-integrated in society.

Thirty-eight percent of Stockholm residents think immigrants are integrated well, with 26 percent of Malmö dwellers answering the same for their city, a 9 percent-drop compared to the 2009 survey.

Of all the cities included in the study, the two Swedish cities showed the highest discrepancy between the percentage of respondents who were favourable toward foreigners and those who thought they were well-integrated.

"In Stockholm and Malmö – where the presence of foreigners is perceived as a good thing by a majority of respondents – there is also a majority who disagree that foreigners who live in the city are well-integrated," the researchers wrote.

"Malmö and Stockholm recorded discrepancies of respectively 52 and 50 points."

The two Swedish cities topped the discrepancy stakes on this question ahead of Munich and Helsinki.

A total of 79 European cities were used in the analysis. It included all capital cities of the countries concerned, apart from Switzerland, together with between one and six of the larger cities in each respective country. Around 500 citizens per city were interviewed.

The findings on Swedes' attitudes toward integration echo those of Transatlantic Trends study released last month by the German Marshall fund.

Among other things, the study found that Swedes have a more favourable opinion of immigration than they do of the actual integration process, and that 64 percent had concerns about how the government was handling immigration issues.