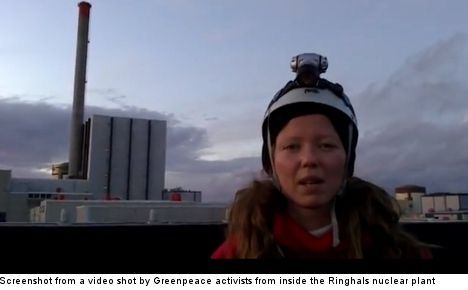 "This was a mild sentence, the lowest possible for this kind of trespassing case," the group's lawyer Jan Palmblad told public broadcaster Sveriges Radio. "The outcome is just part of a campaign against nuclear power and a way of bringing attention to the security risks."

In October 2012, the group carried out what Greenpeace called a "peaceful stress test," aimed at proving that anybody could enter Ringhals power plant, on Sweden's west coast, near Gothenburg.

Several protestors simply walked or cycled through the entrance and were arrested shortly after. Others used a ladder to scale the fence and two managed to stay inside the grounds of the plant until the next day. Two other activists who carried out the same action at the Forsmark power plant, north of Stockholm, were never found and only left the plant after two days.

State-owned company Vattenfall, which operates the plant, said that it had not deployed its more sophisticated procedures to expel the activist, since it deemed them harmless.

Sweden has three nuclear plants that produce 35 percent of the country's energy. In 2010 the Swedish parliament passed a government proposal allowing the replacement of nuclear reactors at the end of their life span, despite a 1980 referendum result in favour of winding down nuclear power.