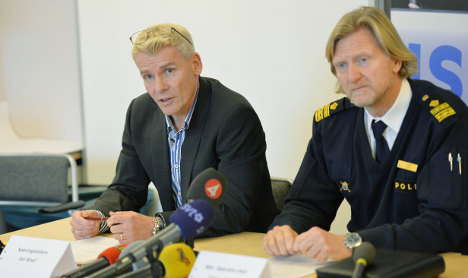 Photo: Jonas Ekströmer/Scanpix
The 33-year-old has been arrested on probable cause for the two deaths, according to a details released in a news conference at police headquarters in nearby Linköping on Saturday afternoon.
Around a hundred police officers are currently working on the case and investigation leader Conny Dahl, deputy chief operating officer at Östgöta police, on Saturday divulged further details of the crime.
At 2am on Saturday morning a woman alerted police that a man had broke into the basement of her house. The man was accompanied by two boys, born in 1998 and 1999.
The woman ended up in a scuffle with the man. The woman's boyfriend arrived to help and one of the boys was freed from the man's custody, Dahl said.
The man is then believed to have left the house with the older boy. Another couple who were in a nearby house saw the man and came out to assist.
"There was a scuffle, and in connection with the boy and the woman, born in 1956, and who had come to his rescue, was killed. Her boyfriend sustained injuries and has been taken to the hospital," Dahl said.
When police arrived at the scene with dog handlers, they managed to quickly find the man and detain him. He was later formally arrested on suspicion of two murders.
The motive was on Sunday as yet unknown, but police believe that the suspect is mentally ill. He is previously known to the police and has a prior criminal record.
While the police don't believe the motive was burglary, the theory has not been ruled out.
"I can't rule it out. There is something odd about it," said Thomas Agnevik at Östgöta police.
Agnevik said that police believe that the man forced the boys into the basement.
"Yes, I 'm afraid that was the case."
Former justice minister Thomas Bodström has been appointed as the man's lawyer and he has yet declined to comment on the case.
Questioning of the suspect will continue on Sunday.