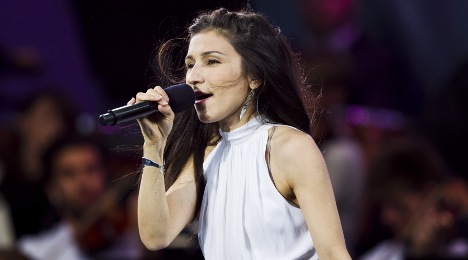 Albums from two of Sweden's biggest pop stars have bookended 2013 – Darin's sixth album, Exit, was a number one in February while Colors, Laleh's fifth long-playing outing hit number two last week. Apart from the fact that they sing in both Swedish and English, there is another unifying thread – they are both of immigrant stock, Darin's parents fled Kurdistan in northern Iraq and he was born in Stockholm in 1987. Darin has worn his immigrant ancestry lightly.

“I feel like a mixture of different cultures and have been influenced by both my Swedish and Kurdish heritage," he told The Local. "I'm really proud of my origin and have been back several times. The first time I was only three years old and didn't understand anything. I think I have been able to take advantage of being able to exist in both worlds. My background means I find it easy to understand other cultures and it helps me a lot when I am abroad.”

Laleh, unlike the affable Darin, shuns the media spotlight. But on the rare occasions she has spoken of her background, she's made light of the cultural issues immigrants face in Sweden. Laleh's parents fled Iran when the governing Islamists took against her father's vocal opposition to their regime. The family moved from Iran to Azerbaijan to Russia and finally on to Gothenburg. It was a dramatic period in Laleh's life but one she tends to downplay.

“When I released my first album in 2005 (Laleh), I didn’t want to talk about escape and where I came from. Although I have a dramatic story, I did not want it to define me. I am not my past, but my future,” she once said in an interview with TV4.

Others have not found it so easy to assimilate. Douglas León, known by his stage name Dogge Doggelito, fronted The Latin Kings, Sweden's first successful hip-hop act, who enjoyed a fruitful decade in the 1990s. León, the son of a Venezuelan father and Swedish mother, is a renowned anti-racism activist and has not been afraid of poking the occasional hornets' nest.

"Even if you are Swedish-born, from the suburbs, you're not viewed as Swedish,” he told one Swedish journalist. “Journalists wrote that we were an immigrant band but I have not emigrated from somewhere! My mom is more blonde than you are! Sweden is in my heart. Moving away would be like taking away a part of me, would castrate me as an artist.”

In retrospect The Latin Kings were really a clumsy attempt to transplant the US east coast rap ethic to Sweden. Some languages really do not lend themselves to the rhythmic cadences of hip-hop. German is one (just YouTube Kool Savas for an excruciating five minutes) and Swedish is another. Both languages are far too cumbersome to tightly hug the sinuous curves of rap music.

Yet hip-hop is becoming increasingly popular in Sweden. Just as the preeminent pop music genre of the last 25 years starts to run out of creative steam, so the Swedes seem to be embracing it. The playlist of Sverige P3 radio, Sweden's best music radio station by far, is becoming more heavily laden with both American hip-hop and its rather ridiculous Swedish cousin. Swedish hip-hop, with the very honourable exception of the rather excellent Lorentz & Sakarias and the up-and-coming Yung Lean, has made the fundamental error of appropriating all the tics and gestures of its American progenitor without incorporating any Swedish musical elements (such as a semblance of a decent tune).

This is, of course, cultural toadying of an almost absurd kind – commandeering a foreign musical genre without in any way acknowledging the music of the country in which it is made. Neither Darin nor Laleh make the mistake of forgetting that Swedes, and other right-minded folk, like tunes. That's why they're huge in Sweden and why Laleh, with her epic new single Colors, may soon be about to break across Europe. As Darin says, "My music isn't Swedish, it's not Kurdish," he said. "It's pop, and that's universal."

Ellinor Olavsdotter understands only too well that you can be as urban, hip-hop or as dancehall as you like but it doesn't matter a fig if you forget the tunes. Of course the artist otherwise known as Elliphant also irritates many people with her Jafaican accent but I doubt she cares that much. Other artists don't get flak for singing in American accents – why should she be criticised for occasionally adopting a different voice?

Her debut album adopts several different guises too. There's a real restlessness at work here – Elliphant takes us on a tour of dancehall, dubstep, modern R&B, hip-hop and even, gasp, straightforward pop. What remains constant, however, is the quality of song. So Music Is Life is a sheer dancehall pop rush, a contemporary update on Madonna's mid-eighties hot streak; Run Far is a propulsive juggernaut, hugely reminiscent of Beck; Down On Life's depressive, bass-heavy groove a cover for a sunshine chorus and Could It Be a genuinely beautiful heartbroken ballad. Only Shoot Me Down's sub-M.I.A. stylings really disappoint (using gunshots in a chorus is so 2005).

Elliphant may need to sharpen her focus on future albums (and her recent signing to US hitmaker Dr Luke's label will doubtless help concentrate her mind) but, for now, this scattershot first attempt will do nicely.

GIG OF THE MONTH

José González, Tobias Winterkorn and Elias Araya released their second album as Junip this year and it, whisper it softly, almost rocked. Expect beauty with a hint of bass-driven groove.