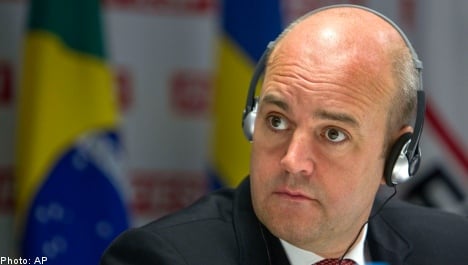 The American company, which makes the Photoshop and Flash programs, admitted last month that its corporate network had been hacked. It's estimated that as many as 130 million passwords were leaked with Adobe saying that 2.9 million users were affected.

However, the true figure is expected to be much higher according to IT security company LastPass. According to Reuters, LastPass estimated that 152 million user accounts were breached in the hacking attack.

An independent report by Swedish IT security firm TrueSec revealed that 400,000 Swedish accounts were leaked online according to SVT.

Prime Minister Fredrik Reinfeldt along with opposition leader Stefan Löfven are among those who have Adobe accounts. Reinfeldt doesn't have a password hint – his is encrypted – but 166 other users have the same password, which is a common word, with hints meaning a hacker could figure out Reinfeldt's encrypted password.

"An intermediate-level student would be able to break these passwords," said Marcus Murray, an IT expert to SVT.

Murray added that the leak wouldn't only impact Adobe user accounts as many people use the same password to access email and social networks. He suggested that users should change their passwords as a precaution.

"Otherwise it's a large risk that you could lose your identity," he said.

Along with leading politicians it's understood that many high-profile Swedish business people along with journalists also had their passwords leaked online.

"I will have to look at this more closely and come back to it," said Reinfeldt's press secretary Daniel Valiollahi to the TT news agency.

Since the Adobe hacking attack was revealed experts have looked at the data which exposed the most common passwords. Top of the list was "123456" followed by "123456789" with number three "password."

Other favourites of Adobe users were "adobe1" and "photoshop."

A spokesperson for information security with the Swedish parliamet said there was no immediate threat to the riksdag as they have "other types of mechanisms in the IT system."

"They have got to do something about this," said Lars Grundström of the information security department of the Swedish parliament.

Grundström added that he would be contacting the politicians who had their passwords leaked online as a precaution.