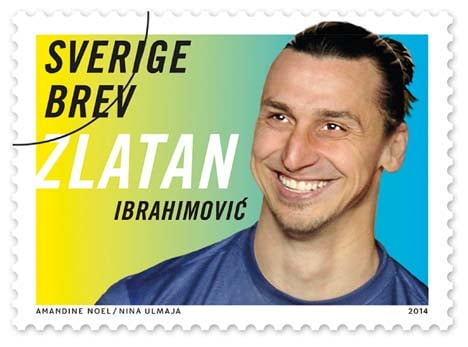 One of the set of five stamps featuring Zlatan Ibrahimovic. Photo: Posten.

Now everybody will be able to get a taste of Zlatan. The 32-year old native of Malmö will feature on a set of stamps to be issued on March 27th.

The man himself, fresh from scoring a hat-trick over the weekend for club Paris Saint-Germain, said he is delighted to be recognised by the Swedish post office (Posten).

"It's a great honour to be on a postage stamp and I'm very happy and proud to have been chosen," said Ibrahimovic on his personal app Zlatan Unplugged.

The head of postage stamps with the Swedish post office told The Local that the superstar was keen on the project and took an active role. Ibrahimovic's image will appear on five different stamps and will come in a special booklet of ten stamps.

"He liked the idea of co-operation as he thinks a lot about his fans like those who maybe can't read or write or have never received a postcard or sent a letter," said Britt-Inger Hahne, head of stamps with the Swedsh post office.

She added that the stamps will help to reach a new audience in a similar way to Ibrahimovic's best-selling book which was a hit with younger readers.

"Many young people had  never read a book before until his came out. I hope that the stamps will achieve a similar thing. Zlatan was very positive about the project and picked all the pictures out which feature on the five different stamps. It is a great honour for him as not many people get their own set of stamps.

The man himself said that he is looking forward to receiving bills in the post as they will now come with a familiar face adorning them.

"I usually receive bills and they seldom have nice stamps. Maybe there will be a change now," quipped Ibrahimovic.

The recognition by Posten completes another good week by Ibrahimovic who is in outstanding form for PSG. His coach Laurent Blanc said he is a strong contender to land the prestigious Fifa Ballon d'Or award for the world's best player.

Ibrahimovic is on the shortlist of 23 players to scoop the prize which is voted for by professional footballers and coaches as well as journalists.

He is also on the shortlist for the Puskas award which goes to the player who has scored the most spectacular goal of the year. Ibrahimovic's bicycle kick against England last year is the contender after it wasn't included in last year's ceremony as it occurred after the voting process had ended.

Ibrahimovic is already the most expensive player in the world having racked up a staggering 1.6 billion kronor ($256 million) in combined transfer fees over the years. Getting your hands on the Zlatan stamps will be slightly cheaper with a single stamp costing 6 kronor and a booklet of ten for 60 kronor.