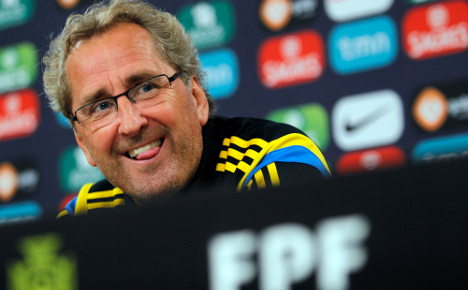 Portugal and Sweden meet in Lisbon in the first leg of their European zone play-off with the return scheduled for Stockholm on Tuesday.

One of the two iconic players, both captains of their national sides, is destined to miss out on the finals in Brazil next summer.

"There is clearly a duel between them. But we must, above all, be good as a team," said Hamren.

"Ronaldo is important. He's a great star, a world class player, but we are playing Portugal and not just Ronaldo."

Real Madrid star Ronaldo returns from suspension for the game in front of 61,000 fans at Lisbon's Stadium of Light.

"All of the players are able to play. Tomorrow we will decide which 11 will start but normally we stay with the core of the team," said Portugal coach Paulo Bento.

"Sweden are good in the air and play direct football. But the team has what's needed to achieve our goal of reaching the World Cup.

"Against Sweden, we must work as a team and quickly impose our game."