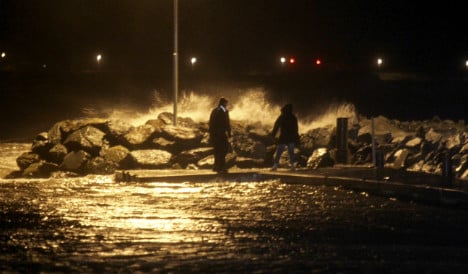 Storm Hilde battering the Norwegian coast. Photo: Scanpix
A powerful storm pulled in late yesterday over Jämtland, Norrbotten and Västerbotten. Shortly before 7pm at least 35,000 households were without electricity and many remain without power as they awoke on Sunday morning.
Worst affected are E.on and Vattenfall's customers in northern and Västernorrland.
At 8am over 16,000 of Eon's customers in Jämtland, Västerbotten and Västernorrland were without power.
"This is a relatively serious situation. There are many faults spread over a large geographical area," said Jacob Holmström at Eon.
Eon has called in resources from other parts of Sweden and which are heading towards the affected area.
"We are concentrating really, but considering how many interruptions there are there is an imminent danger that many customers will be without power on Monday," Holmström said.
Vattenfall had received 70 reports of problems by 8.30am on Sunday, meaning about 17,500 customers are without power.
"It's been hard for us to go out during the night because of the strong winds. We have called in reinforcements from other regions in order to fix as much as possible," said press officer Michael Petrovic Wågmark.
It remained unclear on Sunday morning when customers can expect to get power back.
"We are doing everything we can to give them back their power as soon as possible. But given that there are so many interruptions there is a risk that customers will be without power on Monday," Petrovic Wågmark said.
Police in Jämtland have urged people not to venture out on the roads unnecessarily.
Fallen trees are strewn across roads in the region following the storm with most problems on the E12 in the area of ​​Lycksele.
"There is a lot of trees on the road. We have staff who are working hard to clean up," said Beisi Sundin at the Transport Administration.
Motorists travelling on the E45 have been cautioned.
"There you'll have to zigzag a way between fallen trees," Sundin said.
The storm has put a stop to a biathlon ski tournament due to take place in Östersund on Sunday.
"There is too much wind, the competitors' safety can not be guaranteed," said event organiser Anders Andersson.