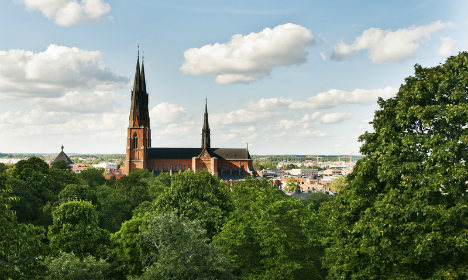 Uppsala Cathedral - not one of the properties referred to in the article. Photo: Samir Hadi/imagebank.sweden.se

“There are weaknesses in our procedures and controls,” Fredrik Ahlstedt, the leader of the municipal council, said at a press briefing on Tuesday.

It remained unclear on Tuesday exactly how much money is involved but reports indicate that it could amount to several million kronor.

The scandal concerns the renting out of municipal properties, primarily commercial and farm properties outside of the city itself.

“Lease and rental agreements were not set at market terms. They have been rented out to friends and acquaintances. We have initiated proceedings for dismissal of two people,” said Joachim Danielsson at the council.

“We have to also quickly reinforce the system in order for it function,” he continued.

The corruption scandal was exposed when the municipality audited property records and contracts. External auditors conducted a review that revealed irregularities.

“Lack of procedures and structure are the reasons why this has been possible,” Danielsson told broadcaster TV4.

The scandal is the latest in a series of corruption scandals which have emerged in recent years with the Gothenburg bribery scandal one of the most high-profile.

“This is not unique to Uppsala – so called cronyism. That provides benefits to people you know. My understanding is that this occurs in a large number of places,” Helena Sunden, secretary-general of the Swedish Anti-Corruption Institute (Institut mot mutor – IMM), said.

“If you look at the number of convictions in corruption cases and which arrive on the desk of the National Anti-Corruption Unit it is fairly constant.”