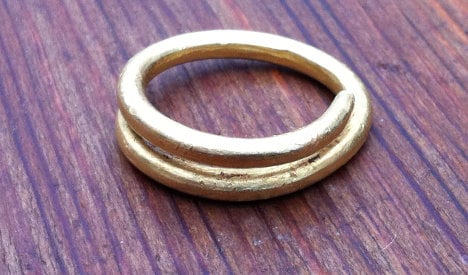 The ring is made of Roman gold. Photo: Camilla Lundin

"I walk through that field several times a week. At first I thought it was one of the little rings we put around the chickens’ feet," Camilla Lundin, 51, told The Local. "I thought it was strange that it was so far away from home."

Lundin took the ring home and showed her husband, who also didn't believe it was anything special. But Lundin took a picture which she sent to her brother, who immediately told her it was a treasure.

"When he told me it was an ancient gold ring, it felt like a gift from the underworld," Lundin told The Local. "It was my magnificent ring. I didn’t want to give it up."

Swedish law states that archaeological finds more than 100 years old belong to the finder. However, if the item is made of alloy such as gold, silver, or bronze, the finder must allow the state to examine and potentially purchase the item.

Lundin reluctantly called the Swedish National Heritage Board (Riksantikvarieämbetet) and gave up the ring for examination. The Board determined that the golden spiral-shaped ring was made in the Roman Iron Age more than 2,000 years ago.

The Board wanted to search the farm where Lundin found the ring, in the tiny town of Gudhem located halfway between Gothenburg and Linköping. Lundin discovered the trinket in June 2011, but due to planting seasons the Board was unable to investigate the field until autumn. The research and paperwork took more than two years, but for Lundin it all paid off. After searching the farm for similar artefacts on two separate occasions, the state offered Lundin 11,000 kronor ($1,672) for the ring.

"I guess I knew right away it was special, but I had no idea just how valuable it was," said Lundin, who confessed she still felt slightly disappointed to lose the ring. "I haven’t decided what to do with the money yet, but it will definitely be something special. Maybe I’ll travel somewhere."

The Roman Iron Age is the period of history in Northern Europe when the Roman Empire’s influence reached the Germanic tribes. During this time many coins, buckles, and other bronze items were imported to Scandinavia.

It's not the first time valuable rings have popped out of Swedish soil – two years ago a woman pulled up a carrot which had grown through her wedding ring, lost six years before.