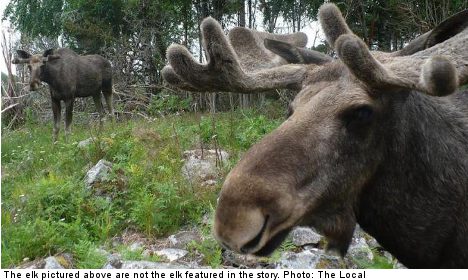 "I was bloody scared," August Anderus told the Expressen newspaper. "I thought I was going to die."

The incident occurred in Halmstad on Wednesday morning when the boy was on the way to school. On a bike path in a suburban area, Anderus was forced to dismount when he found himself in the company of an entire elk family.

"It was the female who came up to me first and I hit the brakes hard. Then two calves came up on my left hand side and there was another one behind me," the boy explained.

The mother and two calves soon ran away, but the aggressive male attacked Anderus from behind, standing up on his hind legs and kicking the nine-year-old in the back four times.

"Oh boy, it was frightening, but it didn't hurt so much."

The boy managed to escape and headed straight for school, where teachers were able to alert his parents as the boy's own phone was broken in the attack.

The police were called, and officers gave permission for local municipality hunter to put down the male elk.