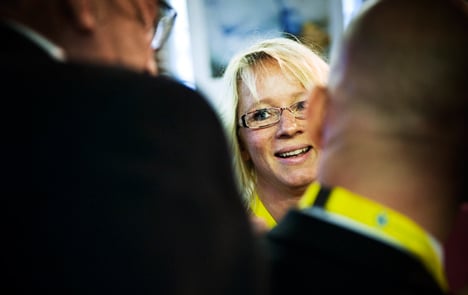 The women's lot in the Sweden Democrats illustrates the party's political potpourri – a conservative (by Swedish standards) view on abortion, a liberal attitude to quotas (they don't want them), and finally the socialist-sounding proposal that public sector employees, who are mostly women, be guaranteed full-time work.

Almost 22 percent of the delegates at the party's national meet in Västerås are women; four of the Sweden Democrats' 20 MPs are women. The party's women wing has around 200 members. Quick maths: if a fifth of the 11,000 members are women – 2,500 – it means less than one tenth is active in the women's wing.

"We're quite new so we're shoring up our place in the party," women's wing chairwoman Carina Herrstedt tells The Local, adding that there is no cooperation with the women's wings of similar parties across Europe.

There are proportionally more female voters than members.  About 36 percent of Sweden Democrat voters are women. Herrstedt says she feels women who sympathize with the party are criticized more than the men are.

"People assume that just because we are women we don't know anything about politics, and say that we can't have made this choice by ourselves," she explains.

The fact remains that many critics insist on labeling the party hostile toward women. Herrstedt claims the party's proposal to lower the legal limit for an abortion from 18 weeks to 12 weeks is not necessarily a deterrent to future members.

"My starting point is that there are women attracted to the proposal," she said. "It is a divisive issue in Sweden. We are not for or against abortion in any way, we just want a safety margin."

Swedish law states that pregnancy cannot be terminated, unless in exceptional circumstance, once the foetus reaches the point where it can survive outside the womb.

The party's stance, however, was heavily criticized by the country's Midwife Association on Friday, which said the abortion limit should thus be set by medical professionals, not by politicians.

Representatives of other parties joined the choir of critics.

At Södertörn University College, meanwhile, senior politics lecturer Nick Aylott says that whether or not the abortion proposal was key to the party line, it reflects the Sweden Democrats' attempts to brand themselves as socially conservative.

"It's a policy that reflects the party leadership's desire to style the party as very socially conservative," Aylott tells The Local. "It will appeal to the more religiously inclined Swedish voters, but it is possible that it puts off women voters.

For the women's wing, Herrsted says it was a mixed policy bag every time they met.

"It's very split – when we meet one person talks about work environment, another talks about abortion, the third wants to discuss the EU," she explains. She would not comment on whether immigration came up most frequently, saying only "We stand behind the party's ideological foundation".

"This is not just a Swedish, but a European observation," Aylott explains. "This type of party attends to attract the less educated, less cosmopolitan, less well-paid, and male voters."

The reason for this, Aylott admits, remains a mystery

"The data is clear that they do, but why is not clear at all."

What has become abundantly clear, however — and is something Aylott and his colleagues have underline — is the party's potpourri of policies.

"This party is usually styled as being on the far-right but in some respects their policies are better located to the left of centre," Aylott says.

Part of the new drive to attract women has now taken aim at the public sector. The Sweden Democrats have said they would like the state to go in and help the counties (which manage healthcare) and the municipalities (which manage education) to make sure public sector employees are guaranteed full-time work. The party has been completely transparent with its drive to attract more women in so doing.

"Many parts of the public sector are dominated by women," Aylott explains. "It's probably a tactically smart move by the Sweden Democrats, but whether it will pay dividends remains to be seen."

At the party level, women's wing chair Carina Herrsted said there was still a lot before the Sweden Democrats reach some sort of gender balance.

"I'm not completely satisfied with the balance, but at the same time if you sit in the party leadership, you should sit there because of your competence, not because you're a woman," she tells The Local.